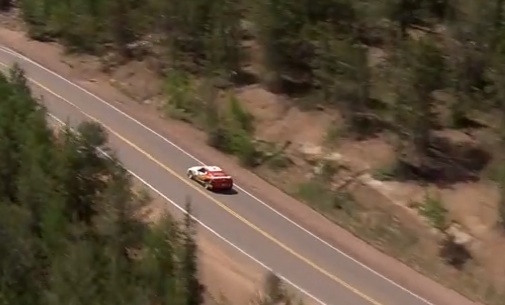 Running Pikes Peak requires a driver to be one with the car they’re going to pilot up to the summit of the mountain. It doesn’t matter if it’s a bone stocker or an all-out race machine: if the driver is not completely confident in the abilities of the vehicle, it is better to not run the course at all than it is to risk it an find oneself off the side of the mountain, heading towards the boulders. Prior to the hill climb, teams are testing out every possible thing they can on their cars to make sure all will go well. Suspension tweaking, brake checks, even something like steering weight and response have to be calculated in prior to the green flag.

Motor Trend’s Randy Pobst got the chance to run one of Pikes Peak Racing’s cars, all he would have to do is pick out which car he would like to run. He settled on a Nissan GT-R based upon his familiarity and confidence from past vehicle tests. With all-wheel drive and excellent brakes from the factory, it is certainly a strong choice. But during testing, the GT-R that PPR had lined up for Randy showed some evil handling characteristics that put Pobst off. We all know how this one ended up: Pobst misjudged a corner and flew the GT-R off the road into a sandy pit. In this episode of Ignition, you get to see what led up to the moment where the flag dropped, and a full ride-along right up to when the Nissan lands after going airborne.

One thought on “Watch Randy Pobst’s Preparation For Pikes Peak: From Taming A Wild GT-R To That Accident, It’s Here!”