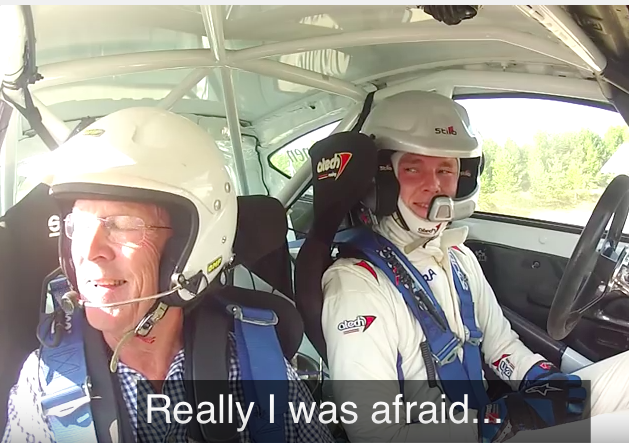 When your dad is one of the greatest rally drivers who ever lived and you have chosen to ply the same trade, you’ve got some immensely large shoes to fill. Such is the case with Max Vatanen the 25-year old son of Finnish rallying god Ari Vatanen a man who won Dakar four times and collected a WRC championship as well. In this video that we were tipped off to by Finnish BangShifter Jarmo Koivula we’ll see young Max attack a rally stage or practice course at absolute full bore as his famous dad is strapped into the passenger seat. While the elder Vatanen keeps his poker face on for most of the insanely fast run, he cracks a couple of times and then really opens up when the ride comes to an end. He admits to being scared witless during the trip and Max busts his chops because he was being told to brake in every corner. We love it.

Perhaps the coolest part of the video is when Ari throws the kid the thumbs up multiple times. We’re assuming this is when he has really nailed a corner or done something well. It is tough to get a perspective on how fast the two are going until you start to pay attention to the revs and what gear the car is in as they are moving. At times this thing is clipping the limiter in what seems to be the last gear in the transmission. The scenery is whizzing by and the relaxed driver making the precise and immediate steering adjustments is contrasted by the guy in the passenger seat who looks like he is about to toss his lunch all over the windshield.

Bottom line? This is a cool father/son video. I think most of us as gearheads have been on both sides of this coin. I can tell you that when I have high performance cars to drive, my kids get wide eyed a couple times when pulling through the gears and I know that I have given my old man the same treatment…just like he did to me as a kid in his GTO.

Not all of us have a rally car and a woodland course at our disposal though!