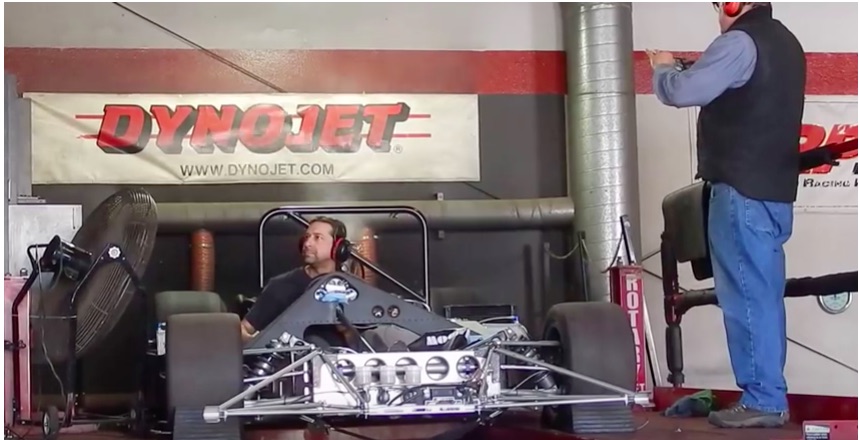 This video is neat on about 500 different levels! Firstly we see a bodiless Shadown DN4B Can-Am car on a chassis dyno which is about as rare a thing as you will ever see. Secondly we get to see the car make a high RPM rip and during it witness some of the most incredible fuel reversion we have ever seen. But let’s get to that in a moment. Firstly the car. The Shadow DN4 debuted int he early 1970s and was one of the best looking Can Am cars of the era. The low slung look, the body that hugged the front tires, all of it was neat. The chassis also did the job supporting big block Chevy engines at first and then later as the series transitioned to small blocks, it held onto mouse motors as well. In this case a small block Chrysler engine as were run in the late 1970s.

Look at the chassis and imagine crashing this car. In fact, don’t. There’s nothing there to protect the driver, seemingly. It is pretty rare to see one of these cars with no body on them. They are always shown at the track racing or making parade laps or whatnot. They remain among the most powerful road racing cars ever and we’re honestly not sure that anything outside of a fuel dragster has had the power to weight ratio that they had in their craziest times. Knowing that and seeing their go-kart like construction makes the hair on the back of our collective necks stand up.

Lastly, watch behind the driver’s head in this video. As the engine RPMs climb during the pull it looks like there may be a line leaking or something spraying into the atmosphere. Well, there is. That’s a cloud of fuel that the engine cannot swallow. Down in the comments it is explained that the car was floating the valves. The owner had made a cam change and now needed to seal springs and properly match the valevtrain to stop that issue from happening. Pretty wild, right?

Watch Regular Car Reviews Feature On The 1989 Buick Century, It's Still Horrible Is Cheap Drifting The Best Drifting? Check Out The Profile On This Low Buck, BangShifty 1971 GMC