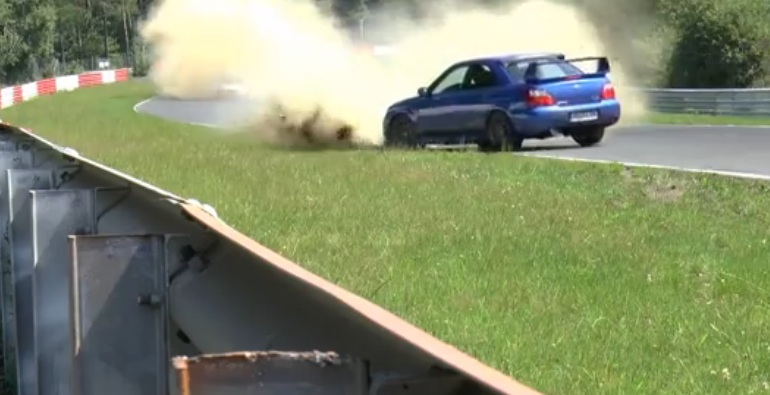 Having spent a week with a WRX STi earlier this summer (you can read the BS road test of it here) I can image the dude in this video’s level of excitement when he pulled onto the Nurburgring in Germany to wring the car out. Listen, this thing makes you feel like you are a rally hero, stunt man, and international man of mystery all at once when you start to lean on it and the faster you go, the better it feels. Let’s just say that it must have been feeling pretty good for this driver because he was absolutely hauling tail when the car got away from him and things took a turn for the terrifying.

When you see this car turn sideways, leave the course, and start to slide aimlessly across the infield and then back out onto the track you are going to think the same thing I did, which was RUH-RO! I sat there waiting for a massive impact that never came. This Subaru driver is either a complete boss behind the wheel or the greatest panic driver that has ever lived because he handled the slide perfectly and managed to get the car spun around in the right direction without touching anything. Yes, his tires were roughly the shapes of a stop sign when he stopped but I’ll take some flat spotted rubber over a mangled WRX all day and twice on Sunday.

If you ever find yourself careening across a race track like some sort of wild, unguided missile, have this guy on speed dial because he could talk you through a solution that’d leave you rolling in the correct direction and mildly short of breath.

Lions Super Pull Of The South 2014 Coverage: All Engine Photos - Wretched Horsepower Excess At The NTPA Pull Meltdown Drags 2014 Coverage: Byron Was Jammed With The Coolest Old School Drag Iron In The Country