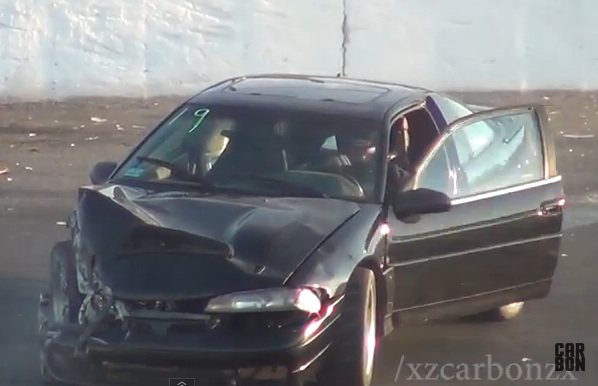 Since it is circle track racing season that means it is also spectator drags season at bullrings across America. Once such track is Seekonk Speedway located in Seekonk, Massachusetts. This is the last functioning race track in the state and it has a strong legacy and following among the round track runners of the region. During the event last weekend, the spectator drags were part of the program and as we have told you about before, the concept here is really simple. You allow guys to enter their street cars into the contest. The cars are then paired side by side and races are run. We’re reasonably sure these are two lap contests but this one never gets that far because one of the competitors eats the wall very hard before the conclusion of lap one.

With a WRX and a Eagle Talon we have two four banger, four wheel drive cars on the track and they both rocket off the line beautifully. The Subaru gains the early advantage by going low and the Eagle is forced to the outside for the lap and the driver is desperately trying to make up some ground. The Eagle driver finally gets desperate in the final corner of the first lap and laces the throttle. That was a big mistake.

Understeering and plowing in a straight line, the car climbs the banking and strikes the passenger side very hard against the concrete wall. The car looks like a total write off. Stuff is pouring out the front, pieces are scattered for a half mile and the whole thing is bent. Remember, this guy likely DROVE the car to the track that night.

PRESS PLAY BELOW TO SEE SOME SPECTATOR DRAGS CARNAGE –

Nut Driver: The Long Journey Home (Part 1) This 1994 Dakota Has A Hemi Surprise Under The Hood But Not In The Way You Expect