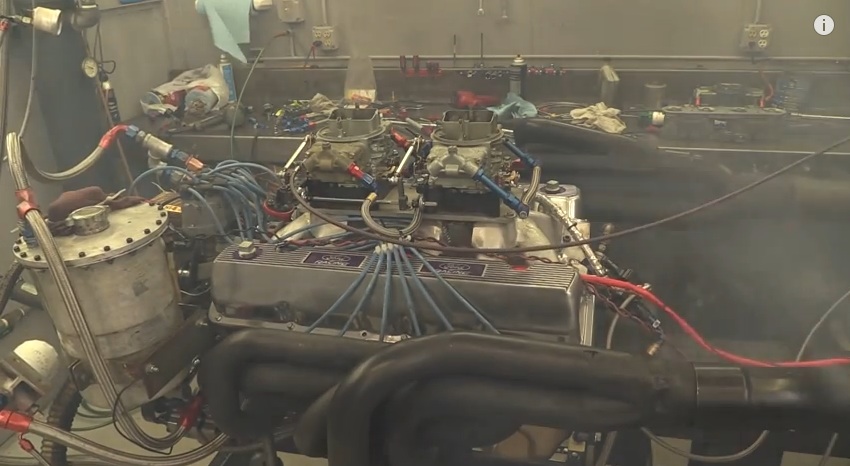 First off, you’re right. Ford never made a Cleveland V12 but brilliant hot rodder Jan Baker sure did and we have video that shows how the whole package came together and of the engine making a couple of dyno pulls. As you will see in the footage below, Baker used a pair of 302 blocks which he mated together, three Cleveland heads that he chopped up and welded, and a really awesome custom made crank. Baker appears in the video and tries to downplay the whole thing as if it is the same as rebuilding a bone stock 302 but let’s be honest here, this is absolutely freaking fantastic in every way. The engine has an amazing scream to it and it looks awesome with a pair of 4bbl carbs on top. You will actually see the engine being prepared with one of the rare inline four barrel carbs that Ford developed back in the “Total Performance” days as well.

We were tipped off to this video by Billy Moffitt who is a wheelstander driver and longtime racer that runs a machine with a unique set of rear wheels and tires that Jan Baker had a hand in developing as well. This is the kind of suspender wearing, down home hot rodding genius that we absolutely love and want to celebrate here on BangShift. The video does a great job talking about the engine and how it came together so we’re not going to double up on that. Just sit back, relax, press play and watch this 552ci Ford Cleveland V12 scream to life in living color right before your eyes.

If this doesn’t absolutely make your Monday, you need to find a new hobby.

Best of BS 2015: Driver Survives Complete Annihilation Of His Truck With Minor Scratches In I-84 Pileup Best Of BangShift 2015: An Ex-Wife Is Making Her Ex-Husband Sell His 1978 MGB - The Craigslist Ad Is Pure Genius