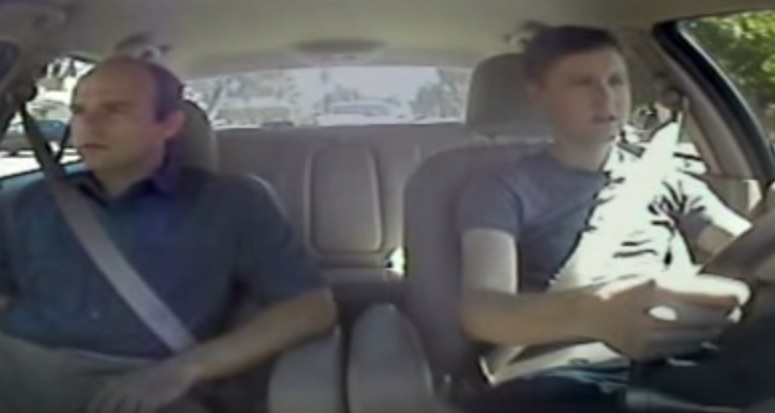 Yes, this video is old and has been viewed literally five million times, but we had to watch it three times just to hear everything because we were laughing so hard. This is a hidden camera deal and the “kid” fails his driving test on purpose several times with different driving instructors. This is high comedy.

In Massachusetts, you take the final driving exam with a uniformed state policeman in the passenger seat. Whereever this video was shot, the instructors/evaluators appear to be “professional” driving instructors who react in all kinds of different ways when the student decides to take his hands off the wheel, answer a call from his grandmother, and pound on the tiller like a drum set.

You WILL have to watch this more than once to hear it all! It is funny to see the driving instructors/testers get more and more wound up by the kid before they finally lose it. When I took my CDL driver’s test and passed the trooper who was riding shotgun signed the paperwork and informed me that my license was valid everywhere in the United States except Fall River, Massachusetts. I asked him why and he replied with, “Because that is where I f’n live!” A joking sneer and snort later, he was gone.

The people who do give driving exams for a living must have the greatest stories ever told. Can you imagine the crap they see on a week to week basis?!

PRESS PLAY BELOW AND PREPARE TO LAUGH!

This 1974 Dodge Coronet Tears Up An Autocross Course With All Of The Body Roll You Would Expect! Watch And Listen To This Vintage Brabham BT42 F1 Car Attack The Hill At Goodwood!