Watch Two Buffoons Crash An ATV While Trying To Show Off For A News Camera – Hit And Run! 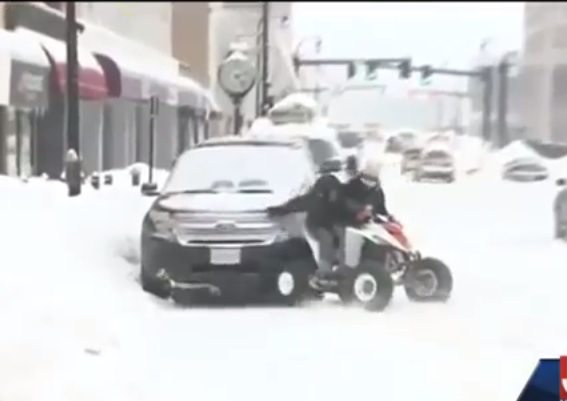 While we certainly have nothing on the Buffalo area here in Massachusetts yet, we’re getting there with repeated large snowfalls over the last couple of weeks (and another two feet rumored to be on the way). This means that driving has become a bit of a hazard and people are starting to lose their minds. When the snow falls we all like to sneak out and have some fun in an empty parking lot or other wide open space, but the guys in Worcester, Massachusetts are pretty hardcore. People there were out bombing around in ATVs and snowmobiles right through the heart of the city and two idiots decided to show off for a news camera and got themselves caught on tape smashing the front end of a car and nearly killing themselves before speeding off.

You can clearly see what happens. The dude driving the thing builds up a big head of steam as he is heading towards the news crew, clearly planning to make himself look like a hero but he has too much speed and not enough traction to slide the thing sideways and head down the road. Instead, he rotates that sucker right into the front of a Ford Edge that is sitting innocently on the curb. Using the oft talked about but seldom seen aft entry technique, his pal on the back of the ATV seems to take most of the impact and they quickly realize that sticking around is going to be expensive or worse so they beat feet. The news camera guy gets a big BangShift high five for staying perfectly with the thing through the whole mess and therefore this is one of the most professionally shot unexpected fail videos we have seen in a while. Kudos to you, news camera guy!

BangShift Project Files: Jamming A 5.0 Into A Well-Used BMW Watch This Install Of A Total Control Products G-Bar Rear 4-Link In A Mustang

4 thoughts on “Watch Two Buffoons Crash An ATV While Trying To Show Off For A News Camera – Hit And Run!”