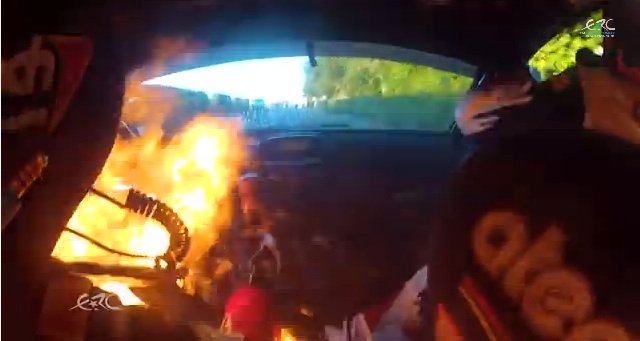 Rally drivers have the same type of determination that a demolition derby driver has: so long as there is a useable gear that is allowing the car to move, come hell or high water they will press on. Rollover crashes aren’t the end of a race for a team-if the car can be rolled over and driven away, it’s just an irritating time penalty for overdriving the car. This is one facet of rally racing that really appeals to BangShifters.

Here you will see the French team of driver Robert Consani and co-driver Maxime Vilmot in their Pugeot 207 at the 2014 Ypers Rally in Belgium. According to Cosani, the Peugeot had broken something at the rear of the car (what, exactly, is unspecified) that left the car in 2WD. At the 3/4 point of the stage the car started to flame up. They stopped and put the fire out and called the team to see what they should do. After discussions, it was determined to get to the stop point of the stage where there would be fire extinguishers and personnel available. During the drive, the fire came back in full force, but Consani pushed it to the stop point before they both abandoned the Peugeot. Both Consani and Vilmont got some smoke and a couple of burns but are generally okay.

“Move like your feet are on fire and your ass is catching”: A good phrase and very applicable to the situation, but I’m willing to bet tonight that two Frenchmen would knock you out if you said it to them.

Okay, Somebody BASE-Jumped With Their 'Chute PIERCED To His Body. Watch If You Dare. This 1972 Chevy Beauville Van Exudes Cool, Has Enough Power Tow Be Fun, And Is As Clean As A Whistle