A Fox Mustang Smashes Into A Tree During an Autocross Event – Major Wreckage! 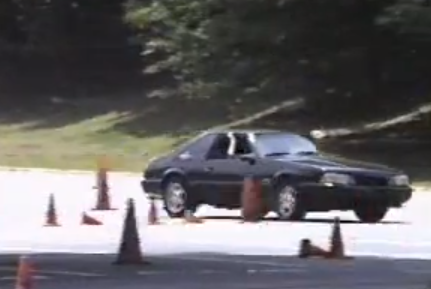 We’ve been to and competed at more than a couple autocross events during our time as amateur stunt drivers. None of those events have presented a competitor with the option of smashing his car into a tree. This video will prove that some venues do offer that opportunity. This video shows a dude in a Mustang getting frustrated and making a bad decision that could have hurt or killed his buddy if the impact area was any closer to the passenger door.

It seems like there would be something in the “autocross course layer-outer handbook” that would mention avoiding wooded areas or lots literally dotted with old growth trees. Granted, the reason a wreck happened here is because the driver decided to aggressively over drive a lost run. If the racer had finished the lap in a controlled fashion, this would not have happened. That is not to say that it wouldn’t have later on it the day. We’ve never seen an autocross course with this much “stuff” in it to hit.

This could be the most dangerous (exciting?) Autocross venue in America. All those giant trees in the middle of the lot presented a tough circumstance, especially when the driver of the car gets pissed and just stands on the throttle.

PRESS PLAY BELOW TO SEE THE VIDEO AND THE BIG IMPACT!

Hammering Away: Biting The Bullet And Doing Rod Bearings With The Engine In The Truck! Money No Object: 1970 Chevrolet Camaro SS L78

4 thoughts on “A Fox Mustang Smashes Into A Tree During an Autocross Event – Major Wreckage!”