Sep 06, 2019Brian LohnesApex Video, BangShift APEXComments Off on How Not To Catch The Pack During A Caution In Your Sprint Car 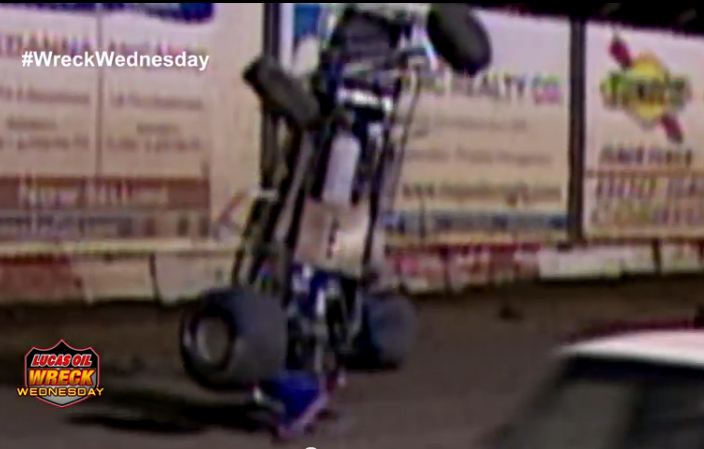 Outside of the historic “river of fire” track dryer wreck at the Daytona 500 in 2013, this could be the most impressively violent yellow flag crash we have ever seen. We don’t mean that this crash drew out a yellow flag, we mean that this wreck HAPPENED during a yellow flag at a sprint car race being contested at Perris Speedway in California. Racer Dave Darland was trying to catch up to the pack during said yellow flag and came into a corner really hot. Darland pitched the car sideways as sprint car guys typically do in the corners but instead of taking the course he wanted, the car went in a straight line making hard contact with the wall and the rest, as they say, was history.

Make no mistake, we’re not mocking the guy for crashing during a yellow flag. Hell, we have seen guys wreck on warm up laps, and even more low speed situations than that. Who knows, maybe the throttle hung open on him and he was driving his ass off just to try and save the car. Whatever the root cause, the car takes a hard shot and ends up flipping, rolling, and busting itself up pretty good. Because of the MAVTV coverage of this race we see the wreck from in the car and outside.

To his credit Darland drove that bastard right up to and during the moment of impact. He didn’t curl up, he fought the sucker right until the bitter end. These cars are amazingly tough and chances are, if there was a shot to race on Sunday the crew had this thing bolted back together and on the track again. We’ve seen guys turn the trick with a worse looking wreck than this one ends up looking like!

Badges? We NEED Those Stinkin' Badges! History Of The Most Familiar Logos In The Automotive World History Video: The "Other" Racing At Pomona - Sports Car Racing Circa 1960 With Dave McDonald And Max Balchowsky