Your Morning Wake-Up: A Pantera GTS Screaming Around Franciacorta! 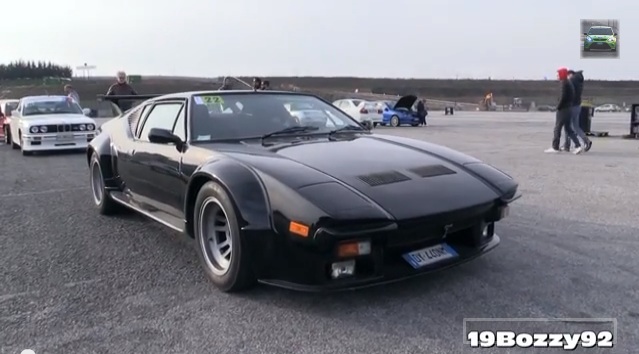 The De Tomaso Pantera is the mid-engine supercar that three out of four American manufacturers were trying to build in the early 1970s. Chevrolet had always been toying with the idea of a mid-engined Corvette, and AMC dropped jaws with the AMX/2 and AMX/3 concept cars. Ford came to the conclusion that if they didn’t get to the market first that they would miss out on an opportunity. Meanwhile, Alejandro De Tomaso was putting the finishing touches on the replacement for the Mangusta, and knew that Ford was looking for an image car to sell in lieu of the GT40. He proposed a deal where Ford would receive cars to sell, and if things went well, a potential stake in De Tomaso Automobili and Ghia. Ford bit, and between 1971 and 1974, over 5,000 and potentially up to 6,000 were sold in the United States. De Tomaso sold the remaining cars in Europe all the way through 1992.

This black GTS is a later build, with the fender flares and the rear wing that is identical to the Lamborghini Countach, but it’s far from an Italian poseur. Once that 351 Cleveland fires off, there’s no mistaking what is going on. Running at Franciacorta during a track day, this Italian-American hybrid makes the kinds of noise that, if you close your eyes, could be confused for LeMans in the late 1960s. Crank your speakers up and enjoy!

In-Car And External Footage of Ott Tänak and Raigo Molder's Crash Into A Lake At Rally Guanajuato México Project Possum Update! The Hotchkis Front and Rear Suspension Gets Installed and Buttoned Up

10 thoughts on “Your Morning Wake-Up: A Pantera GTS Screaming Around Franciacorta!”