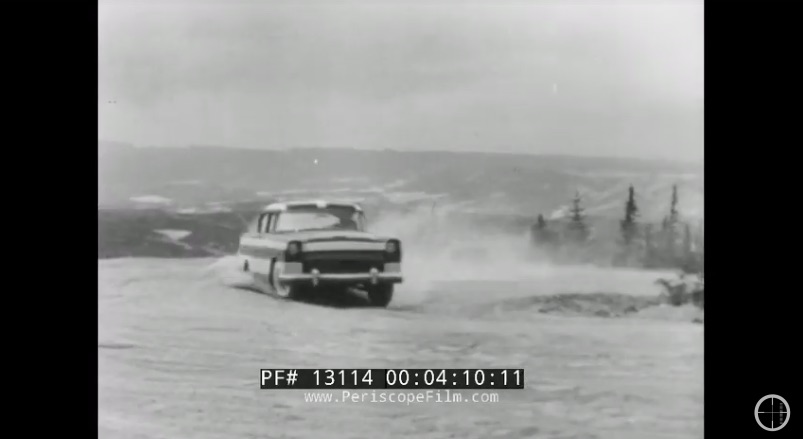 There are certain things that we really, really love around here and this video captures just about all of them. For starters we have great footage with classic narration. Then we have history being made, legends being involved, and a legit feat of strength being performed during an era when such things were legit dangerous.

Careening a 1956 Chevy up the all dirt road that weaves up Pikes Peak could not have been easy. No, the thing was no rocket ship with a 205hp small block in it, but the steering was slow, the brakes were junk, and there was no such thing as a performance tire to do any of this stuff on. Not shockingly, Zora Arkus-Duntov drives the car in this film. He was a champion of all things performance at Chevrolet and he was a racer as well. He likely talked the brass into making this video and to insure its success he took the wheel as well. Adding to the fun and to the “legitness” of this adventure, Chevrolet had NASCAR officials including “Big Bill” France himself time the run and tear the engine down. Pretty awesome!

The car was all disguised up because this was shot in 1955 and Chevrolet did not want to reveal the styling changes that were coming for 1956. The tri-five Chevy era would hit its zenith with the introduction of the iconic 1957 model, but everyone has their favorite (1955 or bust for us). They did a pretty good job of slapping the ugly onto this thing because it is not recognizable as a ’56 Chevy, that is for sure.

Enjoy the video, the history, and the work of Duntov…we still do!

No Small Task: Machining Tiny Connecting Rods For A Miniature LS Engine Is Quite The Process Half Ton History: This 1965 Dodge Film Is A Slightly Slanted Comparison With Ford and Chevy