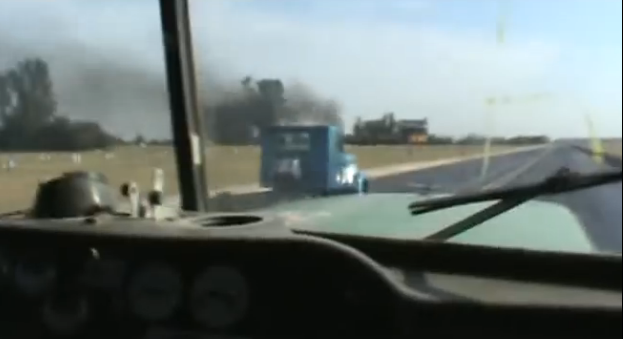 We have hurled some amazing sounds at your over the years here at BangShift but this could be the topper. We may as well just shut thing thing down and walk away with our heads high for dumping this 53-yard dump of win all up in your business. Thanks to BangShifter supreme contributor Greg Rourke, we have this video to show you. Shot from the interior of the cab of a 1975 Peterbilt with a 12V71 Detroit diesel and straight exahust stacks, this is pure auditory porn. The truck we’re riding in is a non-turbocharged model so there is nothing to disrupt the wonderful sounds of two stroke greatness from entering the atmosphere. It absolutely screams, and yells all the way down the strip. The driver bangs the hell out of the gears and while we don’t see elapsed times, it looks like the truck is hustling down there pretty hard when they get to the finish line. That’s the first pass and you HAVE TO stay around for the second one because that is where the real magic happens.

In the second run, the non-turbo, straight piped Pete 359 faces off against the stripped down, hot rodded, 12V92 turbocharged “Cornfield Corvette” that we have shown you doing huge burnouts and hauling ass on the street. The ‘Vette rips off a bad ass burnout and both trucks stage. The naturally aspirated truck gets the jump (we’re assuming this was a bracket format race) and it looks like it is in the free and clear…then the camera looks back. When the camera looks out the back window, something becomes abundantly clear and that is the fact that the Cornfield Corvette is coming and it is coming RIGHT NOW. All of a sudden the Cornfield Corvette comes by like it has a rocket strapped to its ass and motors down the strip like the Pete is tied to the stump. Both guys in the Peter actually giggle after the fact because even though they were whipped, they were whipped by a bad ass truck. This video is too damned cool.

PRESS PLAY BELOW TO SEE THE COOLEST BIG RIG DRAG RACING VIDEO ON THE INTERNET…AND THE BEST SOUNDING!

Tonka Toys Had The Best Ad Campaign In 1972 That Has Ever Existed For Toys The Monday Shift: This Brazilian Opala Has A Nitrous Injected Small Block, A Clutch, And 7-Second Time Slips For Days