Jul 06, 2018Brian LohnesBangShift XL, XL VideosComments Off on In The 1930s A New York Chevy Dealer Had A Mahogany Boat Built Around A 1936 Chevy Sedan (W/Video) 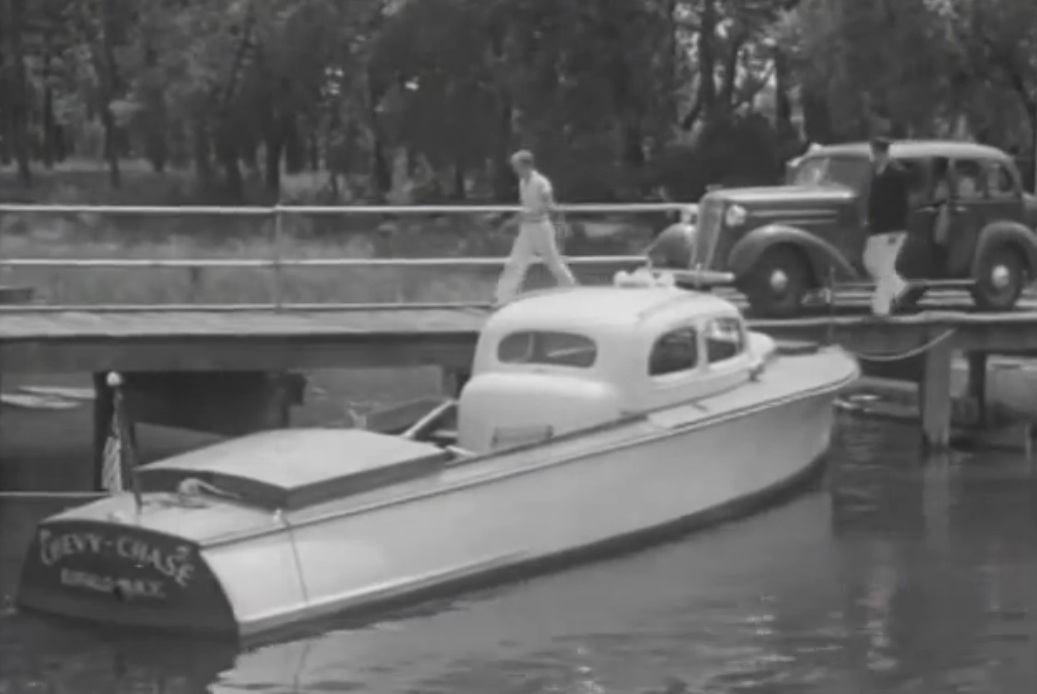 The late Percy Hunt of Buffalo, New York seems like he was one heck of a guy. Hunt was a large Chevrolet dealer in the buffalo area and a very astute business man (as you’ll learn about in a minute) who had the amazing craft that you’ll see in the video below built for him. We’re not sure who the boat builder was but when Hunt told the guy he wanted his boat built around a 1936 Chevy sedan we have to imagine that there were some raised eyebrows and perhaps a little bit of scoffing as well. But, as the old saying goes, “money talks” and as you’ll watch below, Hunt got his boat and it is one of the neatest things we have seen in a long, long time. A first we were thinking that we’d see a floating car but instead what we see is a beautiful mahogany boat with the body and running gear of a 1936 Chevy serving as the cabin and wheelhouse. The boat’s name? Chevy Chase, of course. Appropriate for a guy who sold Chevrolets and had a last name of Hunt.

At 35′ long, 5,000lbs, and powered by an inline six that probably measured to around 210ci and produced 80hp the boat was able to travel at 18 knots and in calm water it was apparently able to make 20 at full song. That’s not a speedboat by any stretch, but still plenty of speed to cruise around and enjoy the water with. We’re guessing that the engine and transmission were left just as they would have been in the car and the driveshaft was attached to a prop to drive the boat. Not being aquatic engineers ourselves we’re wondering if the transmission’s 1:1 top gear ratio would give enough prop speed to move the boat along or if there was more gearing involved to get the propellor spinning even faster. You guys tell us.

Oh, and about Hunt’s business prowess. In 1942 just before all domestic automotive production was ceased in order to make war supplies and equipment, hunt ordered 250 Chevrolets and put them in storage at the old Pierce-Arrow plant in Buffalo. During the war he sold a few here and there to good customers that needed a car and when the war was over he was the only guy to have “new” cars on his lot for a long time, even though they were four years old. Apparently they were snatched up in a heartbeat. A great gamble that paid off.

We’re hoping that this boat has been kept somewhere or preserved somehow. It is beautiful even being as odd as it is. Has anyone ever seen it in recent times?

PRESS PLAY BELOW TO SEE PERCY HUNT TAKE THE CHEVY CHASE 1936 CHEVY SEDAN BOAT ONTO THE WATER FOR A CRUISE – WHAT A NEAT PIECE!

If You Had $1000 Or Less To Get A Beater Shop Truck With, What Would It Be? Gallery: 23 Killer Cadillacs From The BangShift Photo Archive