Half Ton History: This 1965 Dodge Film Is A Slightly Slanted Comparison With Ford and Chevy

Jul 09, 2021Brian LohnesBangShift XL, XL VideosComments Off on Half Ton History: This 1965 Dodge Film Is A Slightly Slanted Comparison With Ford and Chevy 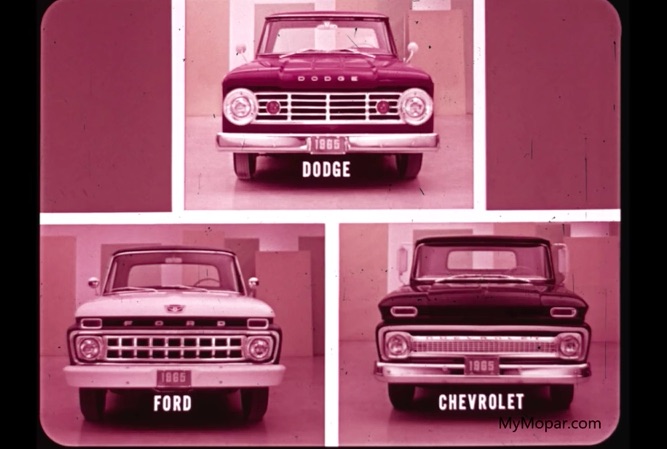 Ahhhh, more vintage manufacturer promotional video. This 1965 Dodge film is a slightly slanted comparison with Ford and Chevy trucks of the same year. Obviously because it was produced by Dodge it was intended to give their sales guys the ammo necessary to close deals and move inventory. We really like the fact that Dodge was educating the heck out of their sales people and this video is a really neat front to back comparo of the trucks. The front suspension comparison is really neat and in some ways that is an argument that truck manufacturers use today.

In 1965 Dodge was using a normal old beam axle, the type that had been used for hundreds of years dating all the way back to horse drawn wagons. Ford had made the switch to their interesting and kind of complicated Twin-I Beam design and the video makes careful note to tell the viewer that the design has not yet really been proven. Then Chevrolet is shown and they went to a typical independent front suspension with coil springs. The engines are compared and the body construction is another area that Dodge spends time on. The mention of rust prevention is kind of interesting. We know that the sales guys in the northern states likely latched onto that.

We were hoping that they would mention the CSS models of these trucks. Those were the big horsepower “sport trucks” that Dodge introduced and in doing so really created a genre that still exists today. That being said, the company was trying to sell volume so more time is taken with the slant six and small V8 engines than anything that would have been about brute power.

One thing we’ll say for sure? We think that the Dodge is the best looking rig out of the three and that’s likely the largest factor any buyer was basing their decision on in 1965…just like today.

Press play to see this slightly slanted comparison between Dodge, Ford and Chevy

Got A Duramax? Plug In For 150 More Horsepower And 300 Pound Feet Of Torque! Stellantis's EV Day: Life At Chrysler, Plug-In Jeeps, An EV Ram, And What The Hell Is That Dodge?!