This 1988 Video Of Monster Trucks Racing On A Figure 8 Track In Louisville, Kentucky Rules 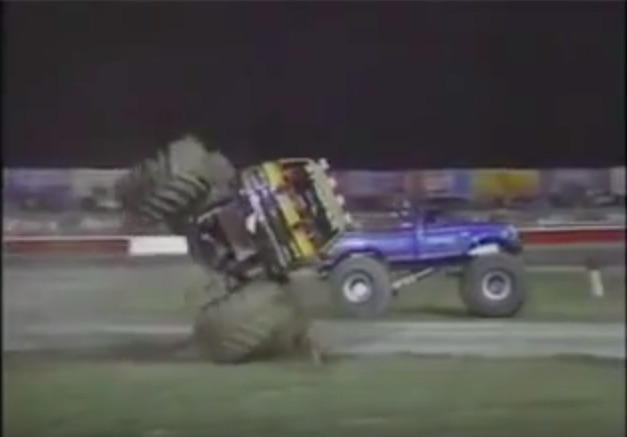 I’m definitely feeling the late 1980s flow today. From the quick eight drag racing video at Shuffletown to this 1989 footage from Louisville, Kentucky, I’m all over it. Anyway, this is a neat video that captures a pretty unique, at least for the time, racing format and it captures a load of awesome trucks doing their thing as well. Army Armstrong is one of the commentators on this video which automatically makes it fun and cool because that dude was a constant voice in my childhood when watching monster trucks, tractor pulling, or other motorsports. I’m loving this.

Ok, so for starters this was one of the, if not the longest course that virtually all of the drivers had ever been on in their trucks. The center of the 8 was filled with a load of cars but the guys had to spend a bunch of time actually racing their trucks on the asphalt oval to get to them. Pretty interesting and while some of the trucks are total slugs, the guys who were “professionals” at the time are impressively fast and impressively balls out when the the chips are down.

The truck that really caught our eye was an early version of the narrow “Awesome Kong” Chevrolet that would be a really advanced design for its day. The slim body and chassis was 44″ wide and gave the thing s weird look. The centrally located blown big block Chevy made it super stable and well balanced compared to other trucks and as you will see, it worked well with Steve Dane behind the wheel.

There’s jumps, bounces, wrecks, fun, and frivolity. This was monster truck racing in 1989 and I’d love for it to return to this!