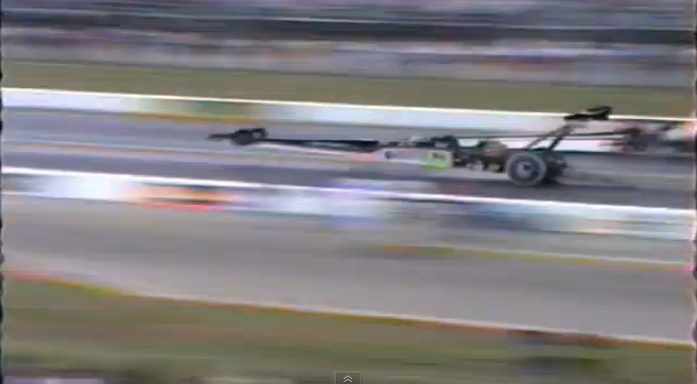 These days Jim Head is a stalwart on the NHRA funny car trail but in years past, Jim was a tough competitor in the top fuel ranks and basically whatever else he decided to race. This video, taken what looks to be in the middle to late 1990s shows Jim Head during his top fuel days pulling an astounding wheelstand at the Texas Motorplex, never lifting and running a four second lap out the back door (under the listed 5.11 bump spot on the board!). We’re not sure if the wheelie bar broke, wasn’t pinned, or deflected but you NEVER see a top fuel car do this and do it with such grace and control. The fact is, most of the times a fuel dragster start to come up like this they end up over backwards in a heap from a blow over. Thankfully for Head, the car settled down in the correct orientation and didn’t get too much air under the body to lift the whole thing over.

The crowd seems to be as stunned as we were when we first watched this video that Jay Mazzotta sent us to look at with the headline, “So sick!” He’s right. This is one of those videos you can watch 10-12 times and try to analyze exactly what happened to get the car into what looked to be the launch position for a cruise missile. You can catch up with Jim Head and his driver Blake Alexander at the Las Vegas NHRA event which is coming up in a few weeks.

They’ve been making progress this season and as a single car operation doing it on their own, that’s 100% BangShift approved in this day and age.

PRESS PLAY BELOW TO SEE ONE OF THE COOLEST, LONGEST, AND FASTEST TOP FUEL WHEELIES OF ALL TIME PULLED BY JIM HEAD –