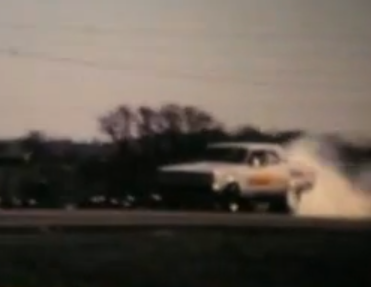 This is one of the coolest old 8MM drag racing videos we have dredged up in a while! The film was taken at the long dead Oswego Dragway in 1968 and it features everything from muscle cars to altereds, dragsters, and even what looks to be a turbonique rocket drag axle equipped door slammer. This is what a day at the drag strip was like back in ’68 and it is complete and utter grainy video perfection. Because this is 8mm film there is no sound so the poster of the video laid a cool old tune called, “Lake Shore Drive” over the video.

We’re really interested in the car that appears around 1:00 into the video and again later on. This is the ‘slammer that looks to be powered by a Turbonique rocket drag axle. At first we were going to say that it was the famed (and rather short lived) Sizzler driven by Capt. Jack McClure but we’re pretty sure that car was destroyed in a high speed wreck in ’66 or ’67. (Here’s the feature on Jack McClure we ran that tells the story) Can anyone identify this mystery machine? We want to know!

Your Swap Is Weak: Watch These Farm Boys Swap A Caterpillar 3412 Into A Big Bud Tractor! Iron Trap's 1934 Ford Coupe "Beautiful" Has A New Engine And Is Ready To Drive!!