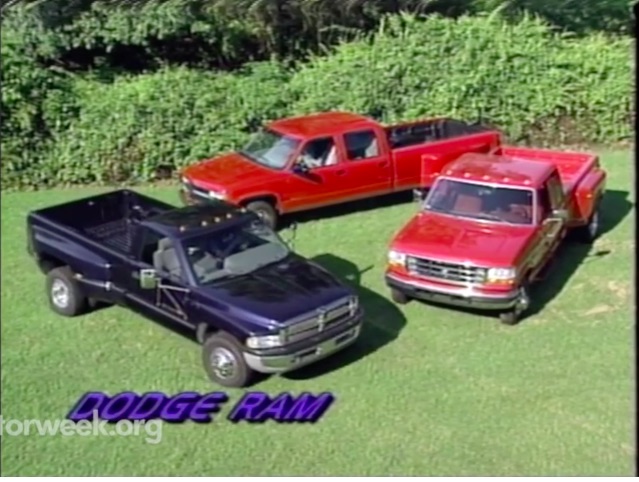 Now this is some fun video to check out on a Thursday! As you all know we love our dually trucks here. A while back Chad added one to his fleet and it is cool. This video is a little newer than Chad’s truck but that’s no bother. This is a Motor Week road test of three dually models from 1996. The neat thing is that they set the trucks up differently between Dodge, Ford, and Chevrolet.

The Chevy had a 454 and was a crew cab. The Dodge had a V10 and was a single cab. The Ford was a super cab with a Power Stroke diesel in it. Seeing all three trucks in their different layouts is cool and it gave the show an easy out on not doing an actual head to head comparison of the rigs. You cannot compare them straight up as the parity would be all jacked up.

The biggest shocker here? The prices of the trucks. Te most expensive was $30,000. The trucks as they sit there would likely cost 70-80k to buy a similar setup today. insane. Converting the $30,000 in 1996 to today’s money that $47,000. We’re guessing stuff or people have not gotten more expensive, so what’s the deal? Simply put, the companies know that about the only thing they have strong margins on are the trucks so they go after the jugular every time the days. Crazy, right?

Press play below to see three dually trucks get tested in 1996 – how much are they?!

2020 Amalie Oil NHRA Gatornationals Action Photos: Those Wild and Wooly Pro Mods! Sleeper Video: This 1975 Holden Kingswood Gets It Done In Fine Old Man Style To The Tune Of 10s In Australia