Wild Video: Watch A Pilot In A 1950s Fighter Jet Slide Off The End Of A Carrier And Get Saved 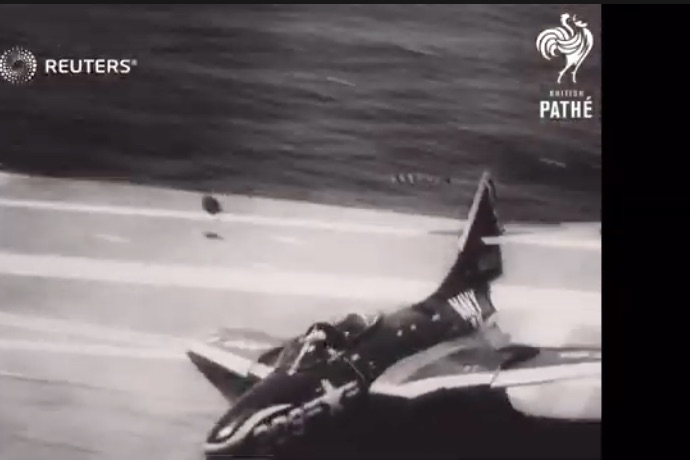 Here’s some wild footage for you on a Friday. You are going to see a 1950s Navy F-9 Cougar jet fighter come in for a landing, seemingly do everything right, and then slide off the front of the aircraft carrier it was trying to touch down on. Amazingly the pilot is saved by the fast acting crew but the whole thing is nuts.

Not being Navy fighter pilots, we’re taking a stab as this one but it sure seems like the pilot was right on the money with the landing and the arrestor cable or whatever system was used in 1956 failed this poor guy. As his plane skids helplessly along twisting backward and then turning frontward, he has to be in there running some real bad scenarios through his head. Drowning is one of them as it was a fate many pilots suffered in scenes like this when their stuff hit the water and they could not get out but there’s a second, worse one. That’s effectively being run over by the carrier itself and this dude JUST avoids that. As the jet goes off the nose, the pilot steers it hard right and it is just enough to have the plane land out of the direct path of the carrier. A helicopter is dispatched and the pilot is plucked from the ocean. Amazing.

The other wild scene here comes from a Florida air show where a B-17 is being used as a prop. The plane, clearly gotten airborne with the help of people is now flying unmanned and it is blasted out of the sky with a flurry of rockets. The potential hazards here are too numerous to fully comprehend. It is awesome.

Press play below to see this wild footage from 1956 – some interesting stuff here!

Racers Gonna Race: Watch This Incredible 1978 Footage Of Fangio and Brabham Throwing Down In Vintage F1 Cars! Are You Coming Or Not? Questions Remains On Potential Start Of 2023 Z06 Production - Will They Start Building In May?