ABS On Tractors? This Video Demonstration Proves How Necessary It Actually Is! 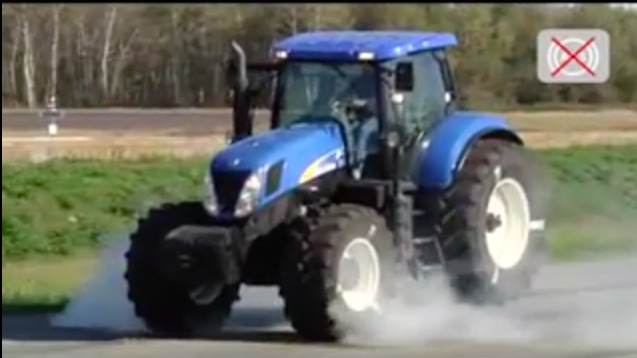 There are certain things that the average person does not think about during the average day. We’d venture to say that one of them is the potential effectiveness of ABS on tractors. Here in the USA farmers do not tend to log as many road miles on their machines as the guys over in Europe that do more actual driving (at normal speeds we would mention) between their fields and stuff. Because of this fact, there are lots of good high speed tractors that companies have developed over the years. One would think with their massive tires and heavy weighs, these things would stop OK but like on cars, ABS Is a game changer, especially if we are talking about something with a load behind it. Also, those huge tires don’t have a ton of contact patch because the big cleats on them are actually what is grabbing the ground unlike a regular radial tire on a car, say.

In this video we see a New Holland tractor fitted with the company’s ABS SuperSteer system. It is shown with an without the system active in a variety of situations that range from a massive tractor sized slip and slide to unladen on dry ground. When you see what happens after the driver lands on the brakes with no abs, no load, and dry pavement, you’ll get why this is a big deal.

The only thing we wish we could see with this video is the size of the actual brakes on the tractor doing the work. They have to be some really legit behemoths to deal with the rotating mass of the wheel/tire along with the full weight of the machine.

Admit it, you never thought about ABS on tractors, right? Now you know!

Check Out This Big Remote Control Bulldozer And Watch It Ride Around On The Back Of A Cool Remote Control Big Rig! RockyNats 2021 Video: Burnouts, Rev Limiters, Cruises And More. And That's Just Day One!