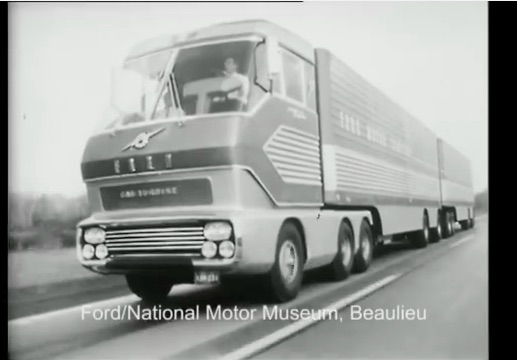 We have showed you photos and given you the history of Big Red, Ford’s experimental turbine powered big rig that was created in the 1960s. It was  a massive truck standing 13-ft high and stretching more than 90ft in length. We’re talking monster, here. Well the one thing we never knew existed was video of the rig actually operating on a public road. Here it is! You are going to get a tour of Big Red and see it on the open highway which is pretty awesome.

Turbine projects were the darling of the automotive industry during the 1960s. Chrysler had their famous fleet of turbine cars, Ford had this big rig (they also built a Thunderbird with a turbine, too) and GM had their Turbo Titan which was also a big rig truck. Outside of that truck companies worked with the likes of Boeing to try out different ideas for turbine power and ultimately they all failed. They did not fail because the engines made too little power or were not durable enough, they failed mostly because of the horrendous fuel economy that the engines produced.

There were other issues as well, like mitigating the exhaust heat and practical concerns like that but their thirst really did not help them succeed. Can you imagine what the EPA would be doing these days if we were all driving turbine cars to regulate emissions? Yikes!

Press play below to see this stupendous video about Big Red –

Swedish Chic: Polestar 1 In The Canyons Of California Classic YouTube: The Republic XF-84H "Thunderscreech" In Action