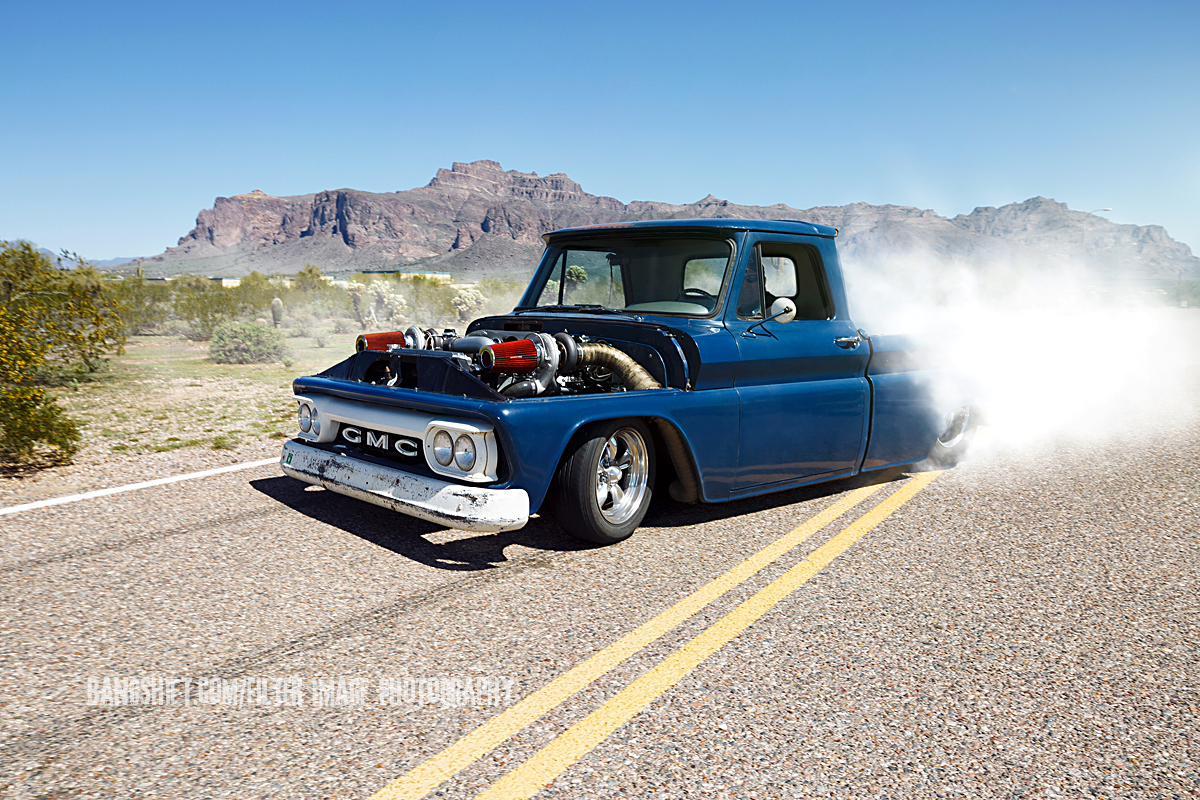 When our buddy Kaleb Kelley, the man behind the hugely successful ClassicsDaily Instagram page, told us about Trevor Howard at FilteredImagePhotography, and mentioned a shoot he had done on a 1964 GMC Pickup with a twin turbo LS for power, we were intrigued. When he sent us a photo asking if we would be interested in running a mini feature on the truck, we about fell over. This is so our speed. Not only is this truck ultra powerful, but it has that ass kicker patina that is backed up by a stance that says “Go ahead, make my day.” We have a feeling this particular twin turbo LS powered 1964 GMC will punch you right in the mouth for a pint of fuel. It’s sort of like the bully in grade school that was a foot taller and 40 pounds heavier than everyone else, because he’d been held back three times. It’s a truck that would get you sent to the Principal’s office just for driving it to school. And we approve.

The following is Kaleb’s writeup on the truck, with photos from Trevor Howard at Filtered Image Photography. Big thanks to both of them for contributing. Enjoy.

Loren Sharrard, and his son Brian, have built multiple GM vehicles in the past, but this one is absolutely insane. I haven’t been fortunate enough to see his former builds, but if this sick twin turbo LS powered 1964 GMC is any indication of what they can do, I would love to see them. 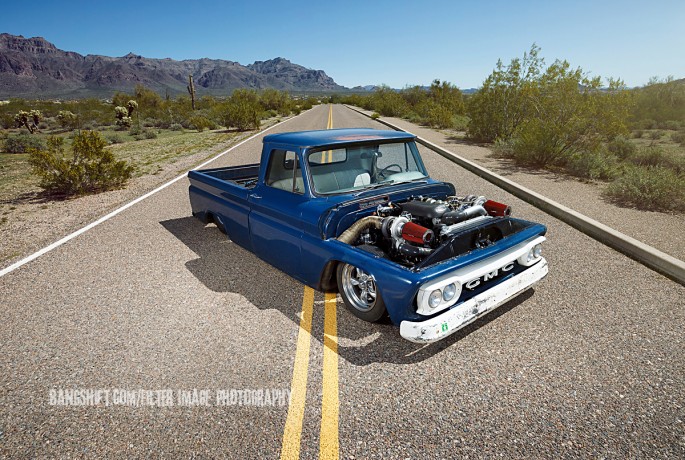 This is the 1964 GMC that he built from the ground up. At first he wanted to just do a simple 6.0L LS-series engine in the pickup, but family and friends talked him into building a turbocharged 6.2L. Like most projects, this one turned out to be much larger than they first thought it would be. One thing that Loren wanted from the get go, was a mean look that would intimidate everyone who saw it. 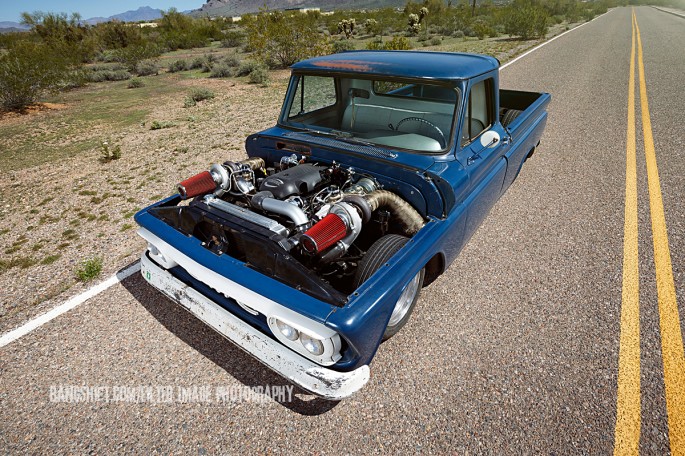 But this truck doesn’t just look mean, as the twin-turbocharged 6.2L LS built by his nephew Mark backs it up. As if the powerful 6.2 liter wasn’t enough, boost is supplied by a pair of Borg Warner S-300 turbos. It was originally a 6.0L that now displaces 379 cubic-inches. A far cry from whatever powered the old GMC when it left the General’s hands in 1964. 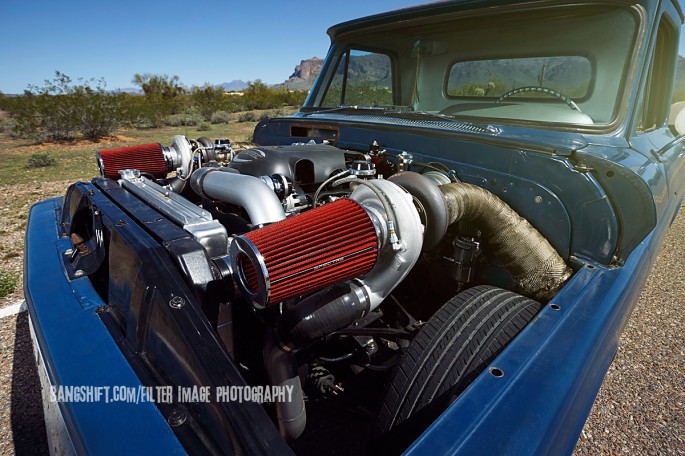 The photographer, Trevor, said that the engine put out over 1,000 horsepower on the dyno at 15 pounds of boost, but they may turn it up soon to exceed 1,200 horsepower. This power is sent through a built 4L60E, back to a Ford 9-inch rear end with 33-spline axles, 3.25 gears, and a Detroit locker with a Strange Engineering third member. 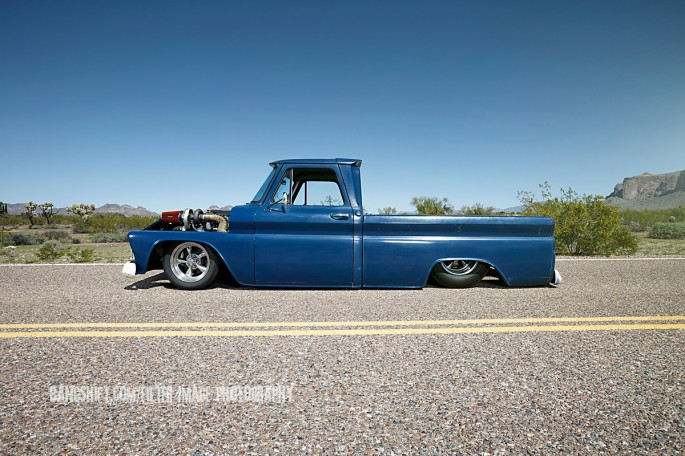 The unbelievable stance is thanks to some serious suspension modifications both front and rear. It has a custom 4-link in the rear with a set of Firestone air bags, while another pair of Firestones handle ride height adjustment up front as well. 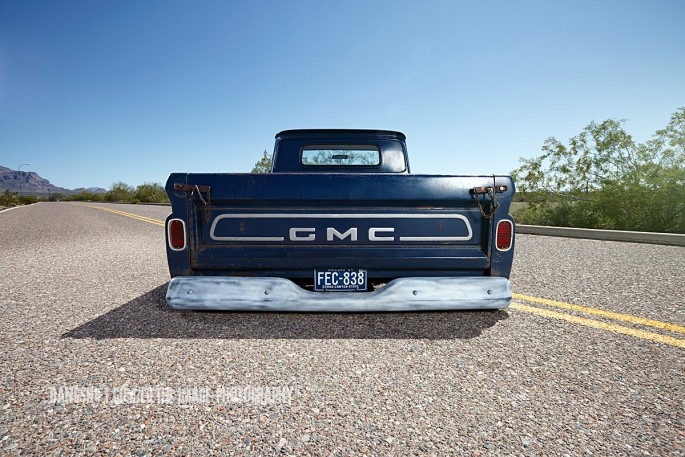 Like most simple project, this one snowballed a little and took more time than expected to finish. This beauty took him a year and a half to build, but Loren is very happy with the final product. As he should be. We love it too. 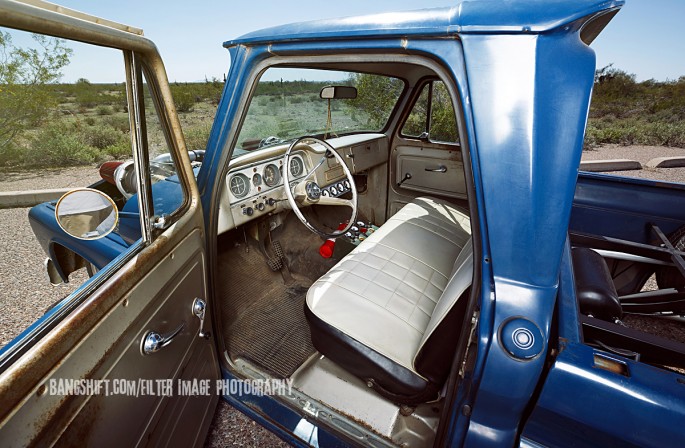 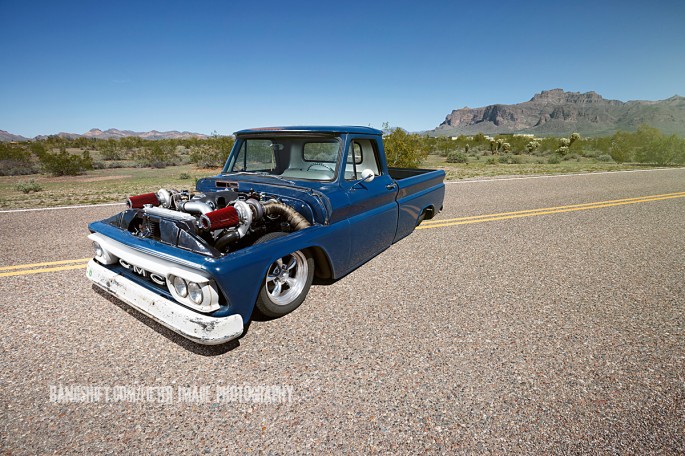