This Fabtech Ford Raptor Is Super Sexy! Plus They Agreed To Jump, Slide, And Thrash It For Us! 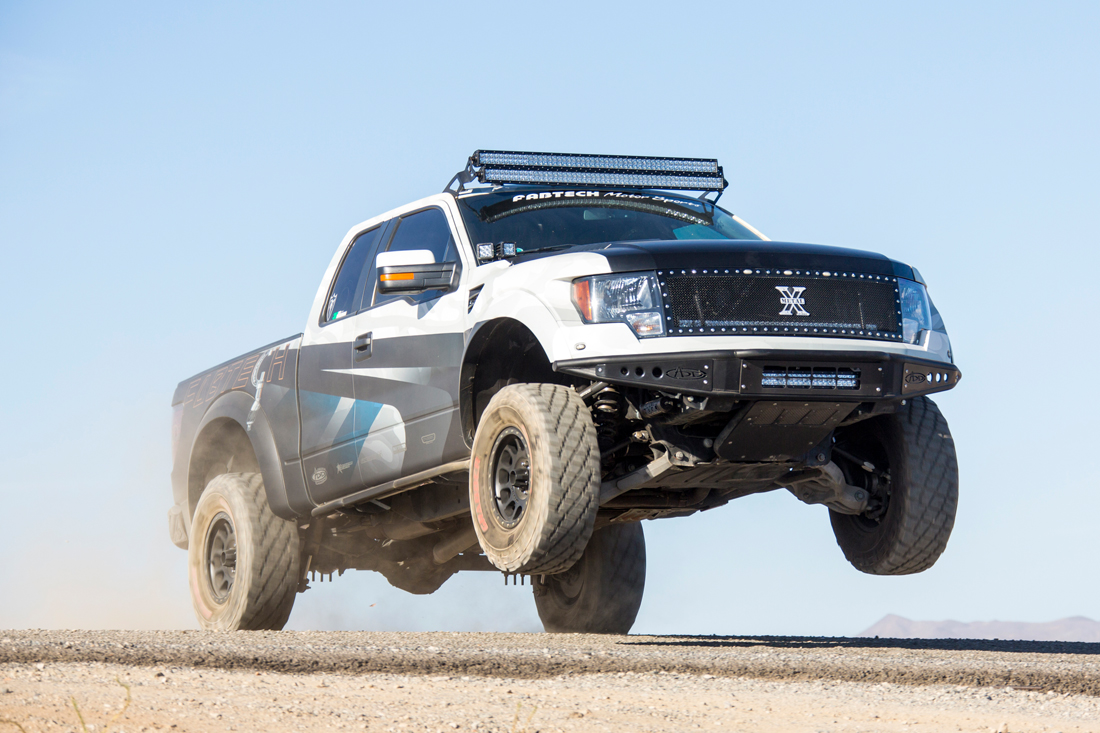 When we called Steve Erdelyi, the R&D Manager at Fabtech, and asked if they had a bitchin truck we could shoot a feature on, he said “of course we do”. When we asked him if they’d be willing to thrash on the thing for us for some cool photos after we got the sexy shots out of the way, he said “Sure!, well what do you mean by thrash?” We’ll let the photos speak for themselves, but while we certainly didn’t treat the poor thing like a rental car or anything, we did get some good air and put the General Red Labels to the test in the California desert for a few hours. The best part? They drove it home right after and the only sign that it had been out for a day of fun was the layer of dust on it. This Fabtech Ford Raptor didn’t blink once, it just took it all in stride.

WE HAVE A LOT MORE PHOTOS OF THE FABTECH FOR RAPTOR CATCHING AIR, THROWING ROOSTS, AND EATING UP WOOPS, SO CLICK THE LINK AT THE BOTTOM OF THE FEATURE TO SEE THEM ALL. 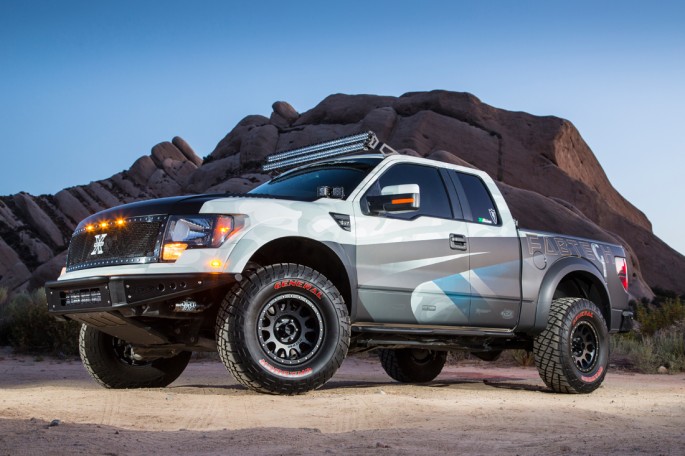 This particular Raptor isn’t a new one, it’s a 2010 in fact, but you’d never know it was living the life a development mule over at Fabtech. David Boyse and the gang at Fabtech recently came up with new graphics for several of their project and race trucks, and we’re telling you they hit the nail on the head! This truck looks ultra cool whether its sitting still or tearing up the desert. 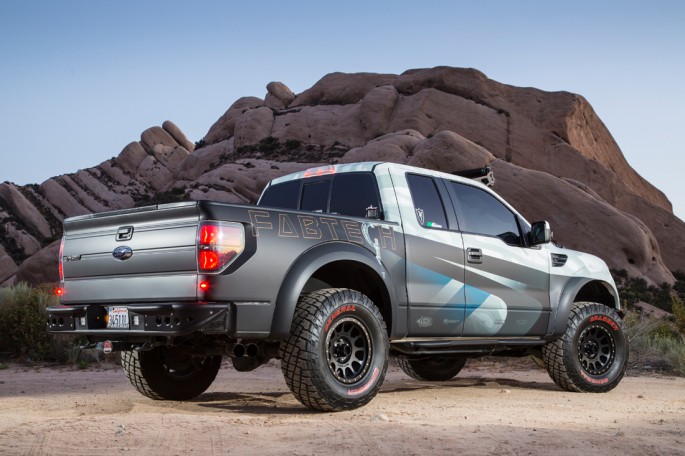 You’ll notice that the Fabtech Ford Raptor is far from stock, but at the same time everything that has been done to it can be done by the guy at home with some carefully selected aftermarket parts. With the exception of the new, and not yet released to the public, 3″ Dirt Logic Coil Over shocks that provide a serious increase in control in the rough stuff, this truck is a bolt on beauty. We remember when only having bolt on parts added to your truck meant that it wasn’t very serious. Well, things have changed. With the solid platform the factory Ford Raptor provides, and the quality of aftermarket off road parts, you can build a capable off road machine that is also just as comfortable taking the wife and kids out to dinner or to the grocery store. 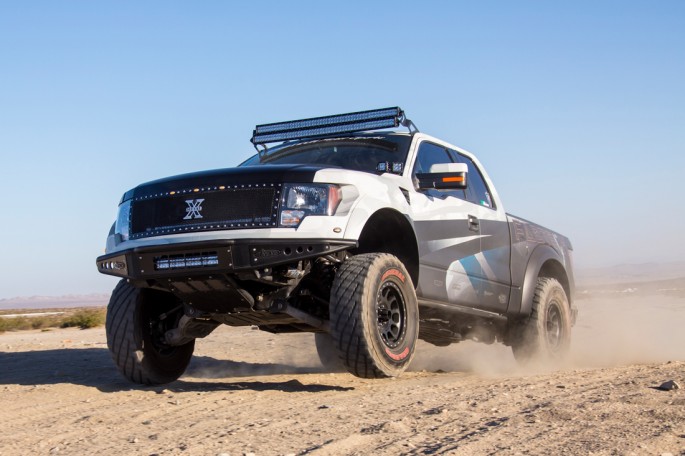 The heart of this truck is the Fabtech suspension system. With no added suspension lift out back, and only 1.5 inches of lift up front, you might thing this is more grocery getter than desert hauler, but you’d be wrong. The 3″ Dirt Logic Shocks front and rear feature a remote reservoir for more fluid capacity, heat control, and fade resistance. They also have spherical bearings at both ends for superior strength in the rough stuff, and Eibach springs that are specifically rated for the Raptor. These are not a shock that has been slapped on just because it’s cool. In fact, Steve and Dave told us that they spend a lot of time on the road, and in the desert, testing shocks on each application. They bring their race support rig out and resident Shock Guru Chris makes valving adjustments as needed until they find the best compromise for on road ride quality and off road control. Based on what we saw with this Raptor, we’d say they nailed it. 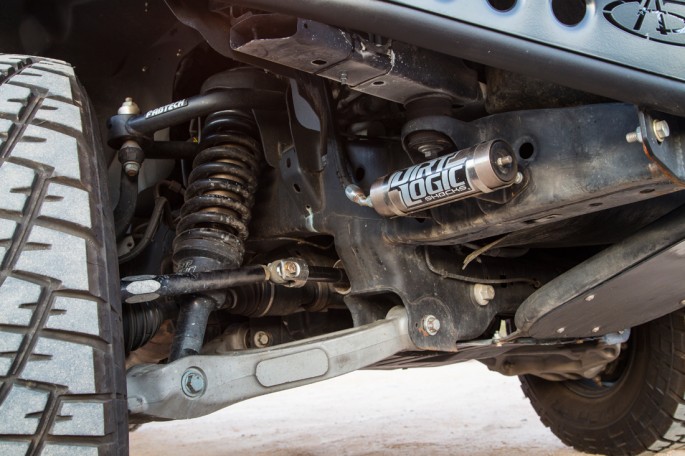 Out back the Dirt Logic 3″ shocks also feature the same reservoirs and overall construction, but without the addition of a coil spring. They are a bolt on into the factory Ford Raptor mounting locations. 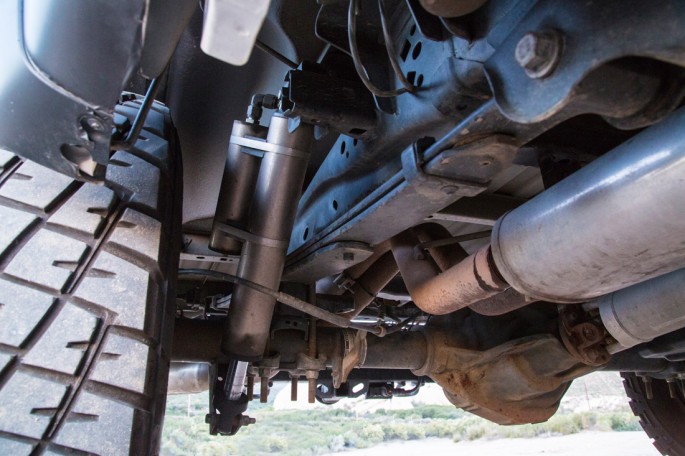 Once of the things that some people don’t realize is that the Raptor does NOT come with 35″ tall tires. They come with 315s stock, which some manufacturers claim is a 35 inch equivalent, but the truth is they are 33.5 to 34 inches tall. On the Fabtech Ford Raptor they run full size 35 inch tall General Red Labels, and are able to because of the 1.5 inch lift, increased control from the Dirt Logic 3″ coil overs, and the Fabtech Outer Tie Rod kit that features MUCH stronger parts than stock. Because the 6.2 in the Raptor makes enough power, gearing changes aren’t necessary with this tire height change, and this Raptor remains completely stock drivetrain wise, with the exception of an AFE cold air kit and exhaust. And because the Raptor comes stock with control arms and front axles that are approximately 2 inches wider than stock, CV angles remain within factory spec on both full droop and compression, despite the fact that both are increased by 1 inch with the Fabtech system. 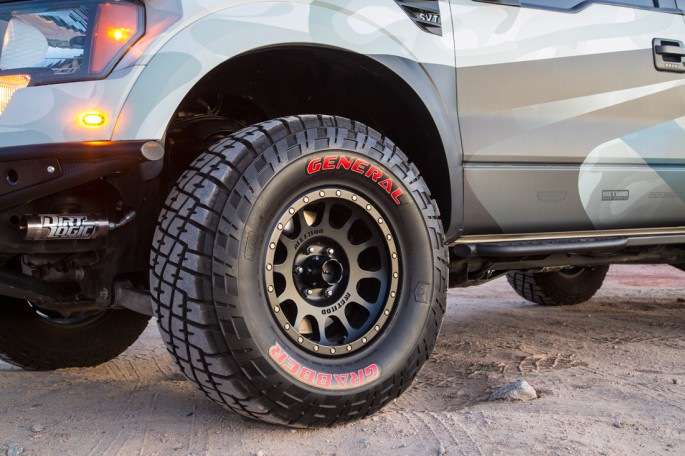 When you first look at this truck, you can’t help but notice several things. The bumpers, all the awesome LED lighting, and of course the cool graphics in the vinyl wrap. We think they nailed it with the new Fabtech graphics, as they really set off the lines of the Raptor. As if this truck needed any help looking aggressive! 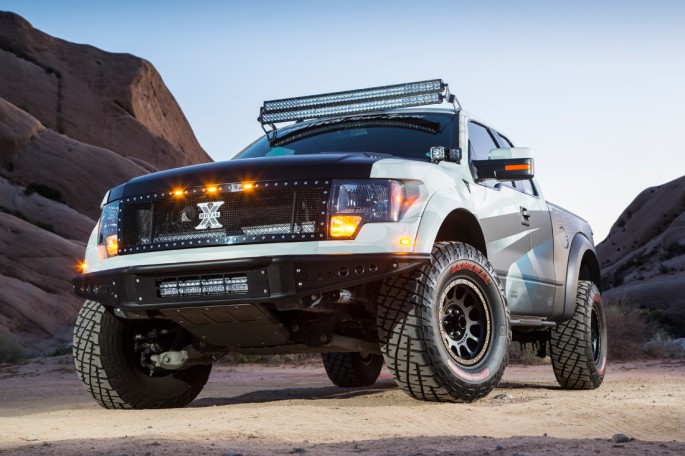 One of the functional, and stylish, add ons you will notice right up front is the killer ADD (Addictive Desert Designs) fabricated tube bumpers that Greg Fouts and the gang over there have created for the Raptor. These suckers are ultra custom looking, but bolt right on like good parts should, and completely sell the race truck pedigree that the Raptor is known for thanks to their tube construction, skid plate, and custom lighting. 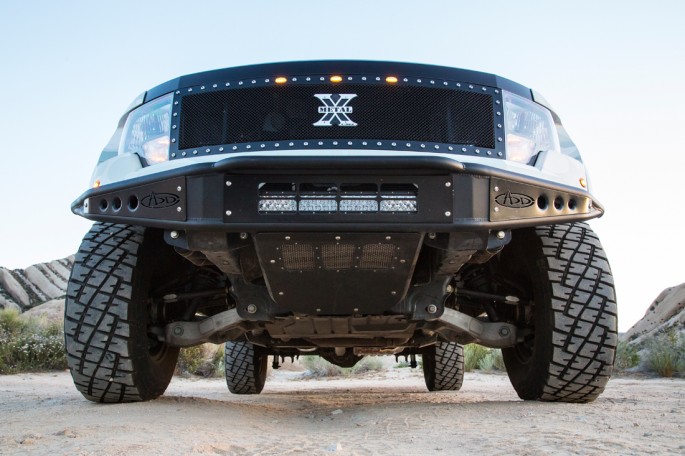 Out back a matching ADD rear step bumper not only continues the race look and strength, but also offers the function you want on a street driven truck. With room for aftermarket lights, and provisions for the factory trailer hitch, the ADD bumper screams race truck custom, but without the custom hassle and price. We dig them! 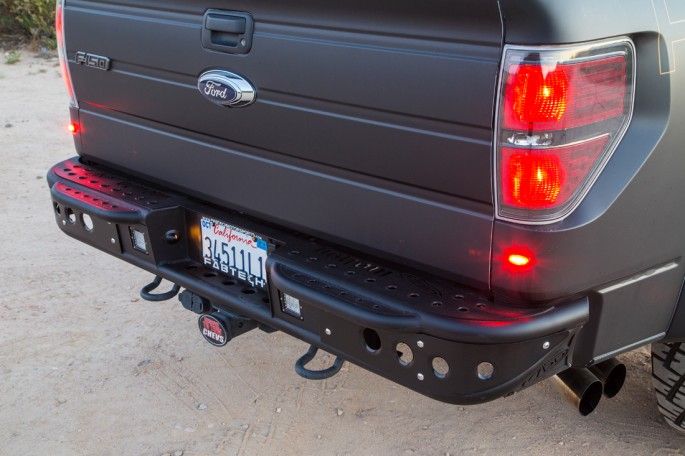 ADD also supplied the race inspired nerf bar/rock sliders that double as steps to get into this beast. 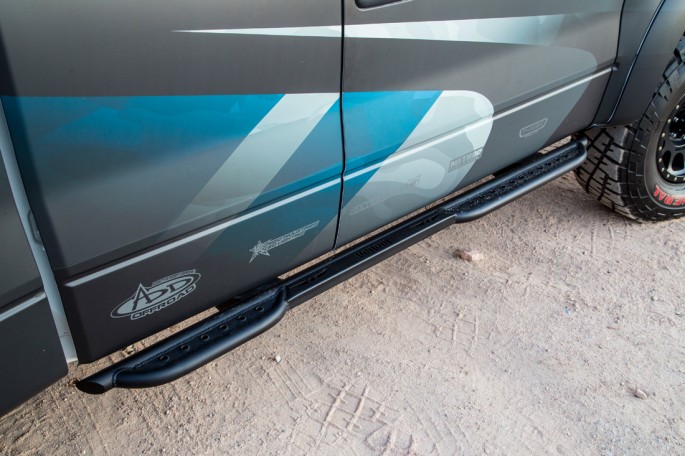 The Ford Raptor comes stock with some LED lighting in the fenders and grill. But this particular Raptor is outfitted with a metric ton of LED lighting from Damon Flippo and the rest of the guys at Rigid. There are floods in the center of the front bumper, a giant light bar behind the Metal X Grill, Flood lights on the A-Pillars, and two giant light bars up top that feature both Spot and Flood lamps built in. Out back there are floods on the front corners of the bed, a lightbar in the center just under the back window, and two more floods nestled in the ADD Venom rear bumber. Needless to say, it’s always daylight when the Fabtech Ford Raptor is around. 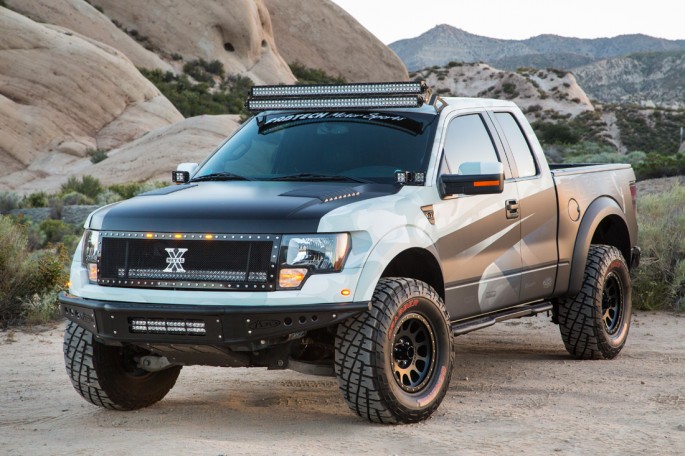 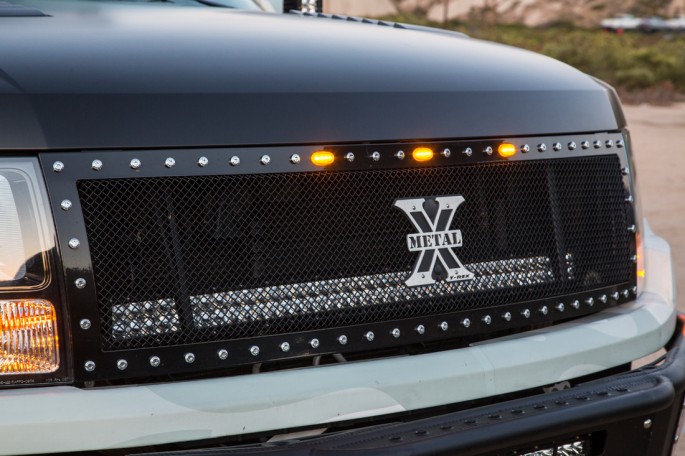 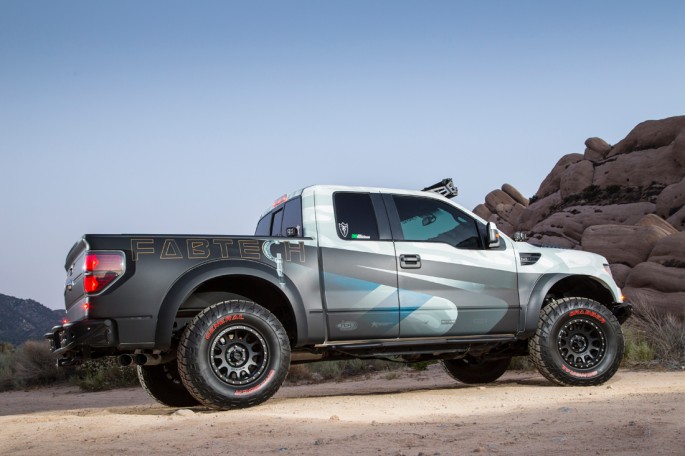 Big thanks to Steve Erdelyi and David Boyse for meeting us out in the desert at 0’dark thirty to shoot the sexy shots of this beast, and for then driving another hour to Barstow so we could run this thing on parts of SCORE’s Desert Championship course. It was fun, and we appreciate it a lot.

Here are some bonus photos to show you just how much fun the Fabtech guys are having racing their trucks off road. 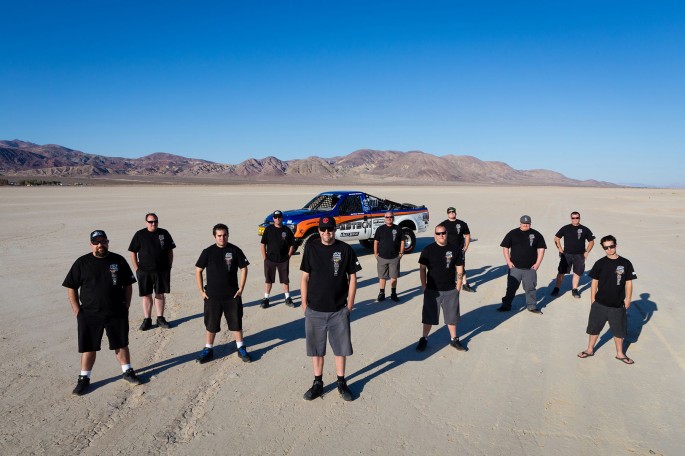 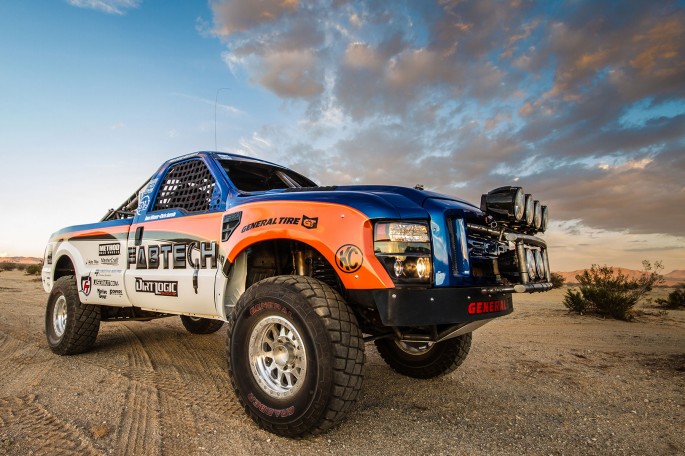 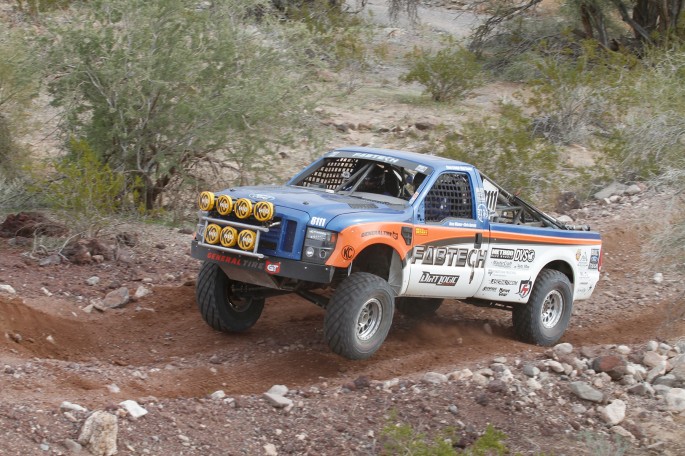 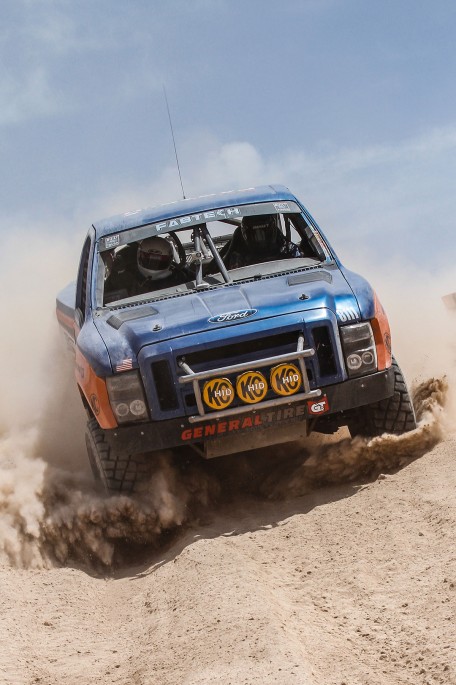 Check out these great vintage photos from New England Dragway on the H.A.M.B. Rowdy Rodders: The Holley Hot Rod Reunion After Party Cruise Turned Into A Burnout Contest Of Epic Proportions

6 thoughts on “This Fabtech Ford Raptor Is Super Sexy! Plus They Agreed To Jump, Slide, And Thrash It For Us!”