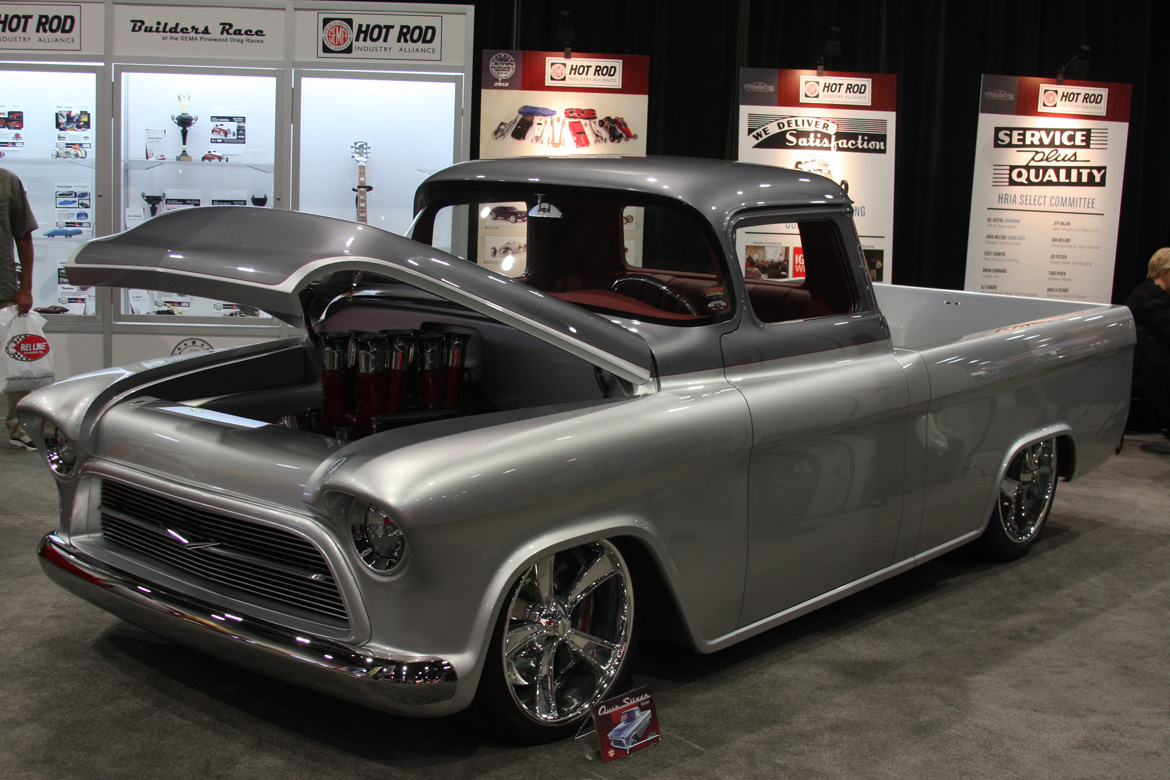 While the nooks and crannies of SEMA 2013 are filled with the cars and trucks that bear checking out, some of them stand above the rest. This 1957 Chevy truck called Quik Silver is one of those vehicles here in Las Vegas that is in the rare are of untouchable coolness. Built by the guys at Oklahoma’a Hot Rod Garage, the truck is owned by Alan Beers and features an amazing level of fabrication and sophistication that makes it one of, if not the single most impressive custom pickup trucks we have ever seen in person. Other think so, too. Quik Silver was in the vaunted Great 8 at the 2013 Detroit Autorama and missed out on the vaunted Ridler Award by a whisker. Few builds we have gotten up close and personal with have this level of detail. The truck is as neat as a pin and every single aspect of the machine has been thought out. From the surgical cleanliness of the latch to release the tailgate to the interior which was completely hand made by Chuck Rowland Upholstery in Broken Arrow, Oklahoma this truck was five years of decisions, fabrication, and sweat in the making.

Pickups are an interesting animal to us in the custom car world. They seem to require even more consideration and planning when their lines are going to be modified because we have seen a lot of custom trucks over the years that aren’t exactly what we would call appealing. For whatever reason, machines like late 1950s Chevrolets can look really weird if their iconic looks are modified in extreme ways, bet it with radical chops, sectioning, or other techniques. The true art of the custom in our eyes is making the whole vehicle (whatever the make, model, or style) work in concert with itself. When a roof is chopped something else has to be touched to balance that modification out, when a cowl is stretched you need to then rework a fender to keep things visually correct, etc. The whole process is creating art and the Hot Rod Garage guys certainly understood this as they were crafting this truck.

Every panel on the truck has been modified somehow or hand made from scratch. Under the hood the firewall has been smoothed, the inner fenders were hand fabricated, and the hod itself was hand pancaked and reshaped. The top was chopped three inches and the cowl was filled and moved forward three inches, the front and rear glass are custom made and as you can see they were flushed like a modern car is. Interestingly the windshield presented one of the more vexing problems during the build and what you see in the truck now is actually a modified 1956 Ford windshield that has been cut down to fit. The back glass was custom made and believe it or not is actually curved slightly to perfectly match the gentle arc of the back of the truck’s cab. The front bumper was narrow, reshaped, and tucked. The bed is 100% hand made as is the tailgate and roll pan. Jimmy’s Hot Rod Design created the tail light setup that is on the truck, Greening Ato machines it and it is a detail that we really like about it.

The motor is a stack injected 540ci big block Chevy built by Chaz Rose in Tulsa, Oklahoma. The injection is EFI and controlled by a FAST XFI computer. The intake manifold is an old school Crower piece that we really dig, especially with the calliope style injector stacks. The mill makes a very healthy 650hp. The headers dump into 3″ exhaust and custom make stainless works mufflers. Power is transmitted via a Gearstar 4L60E unit and a narrowed down Ford 9″ handles getting that power out to the wheels. There are Baer brakes on the corners and a Fatman Fabrications Mustang II style front clip under the truck. The rear suspension is a four link with Bilstein coil over shocks, that was custom built and the components were machined by Greening Auto. The wheels are custom made 20×8 inchers up front and 22×12 inchers out back. BFG 245/35/20 tires anchor the front end to the pavement and 305/40/22 smoke makers live out back.

That’s a quick rundown of this amazing truck. Like we said, cool stuff abounds here at SEMA 2013 but there is a class of iron that stands above the crowd and Quik Slver is certainly in it. Dig all the photos below that should give you a true idea of just how nice and thought our this classic hunk of Chevy iron is!

SCROLL DOWN TO SEE ALL OF OUR QUIK SLVER PHOTOS FROM SEMA 2013! 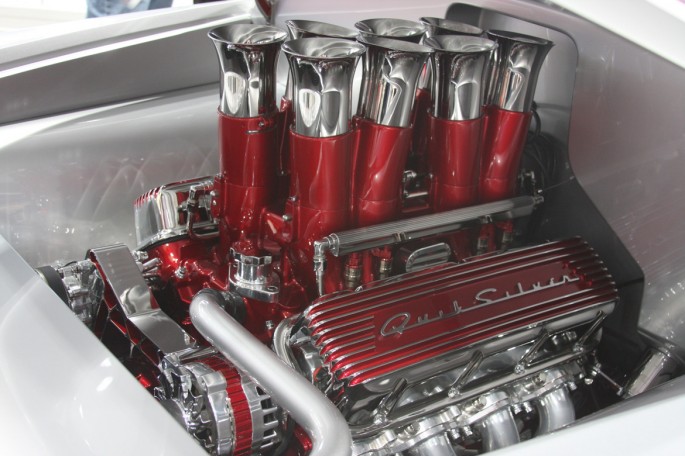 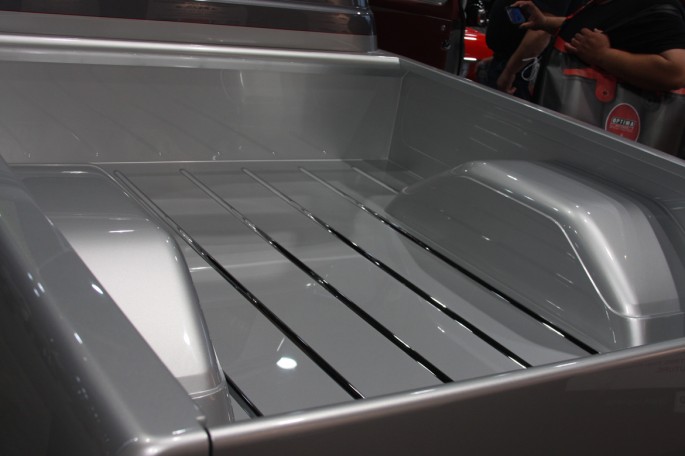 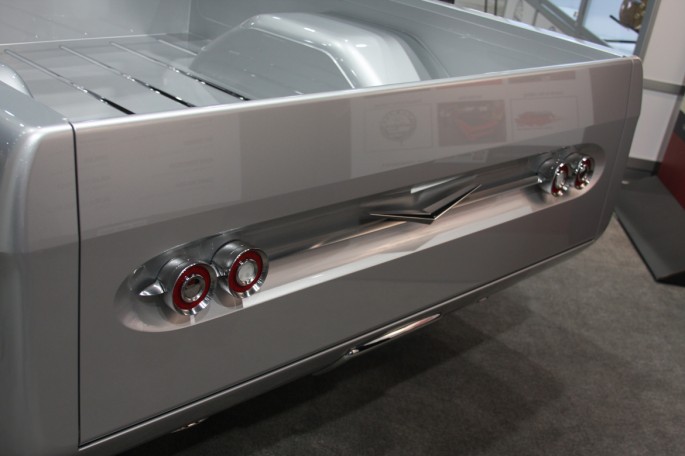 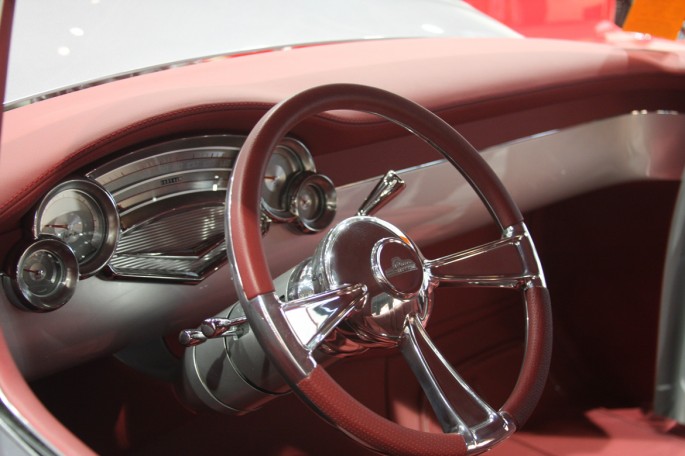 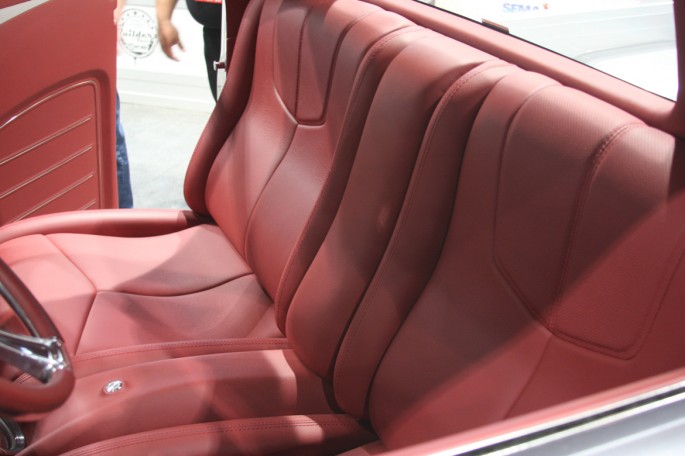 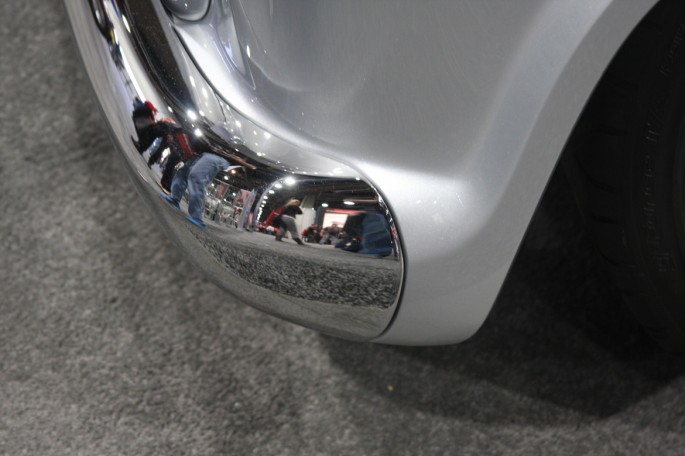 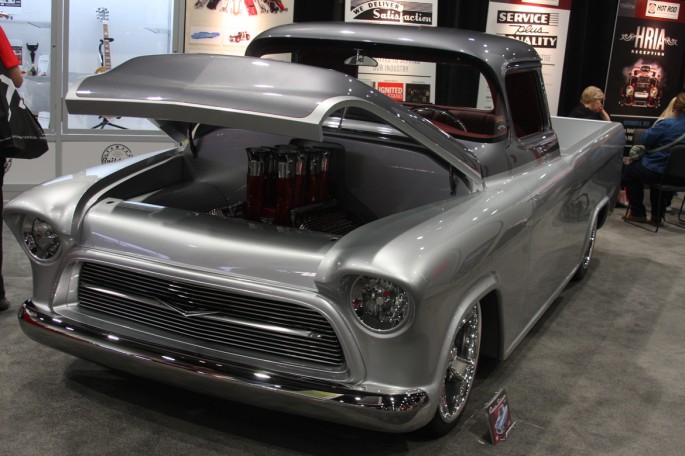 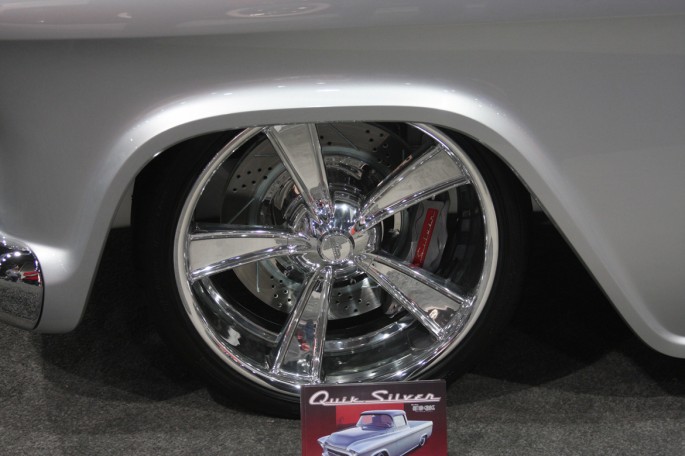 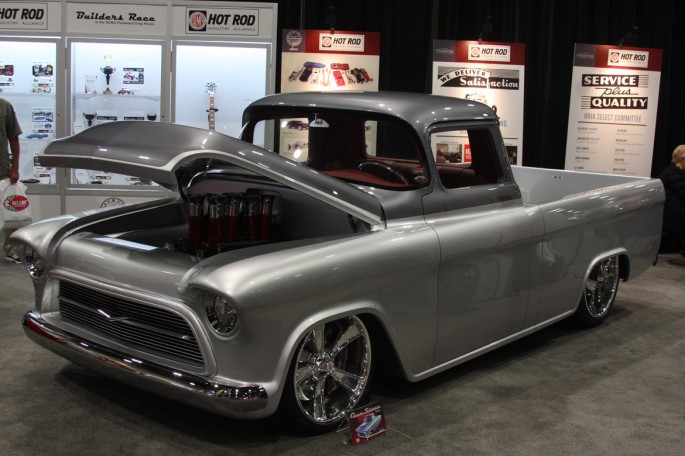 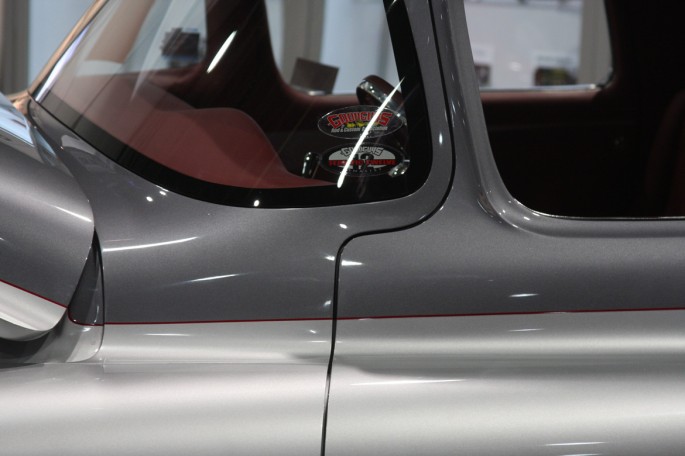 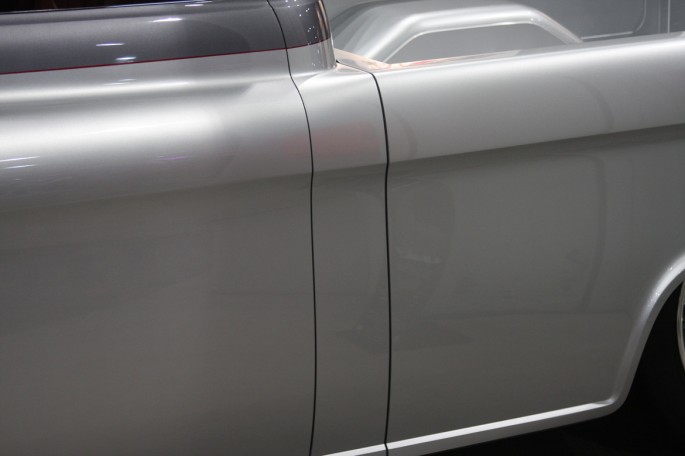 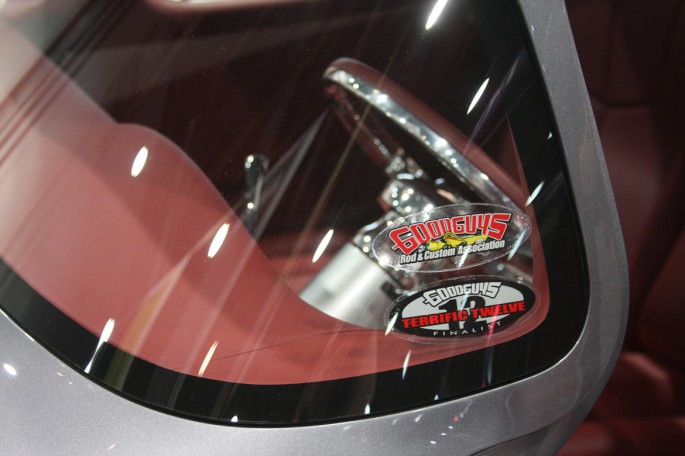 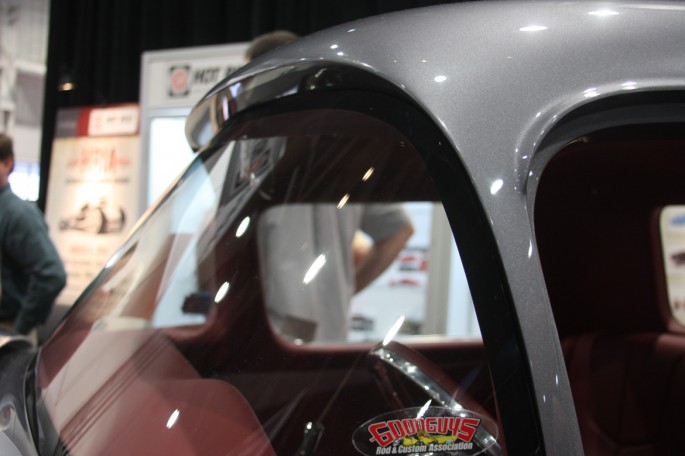 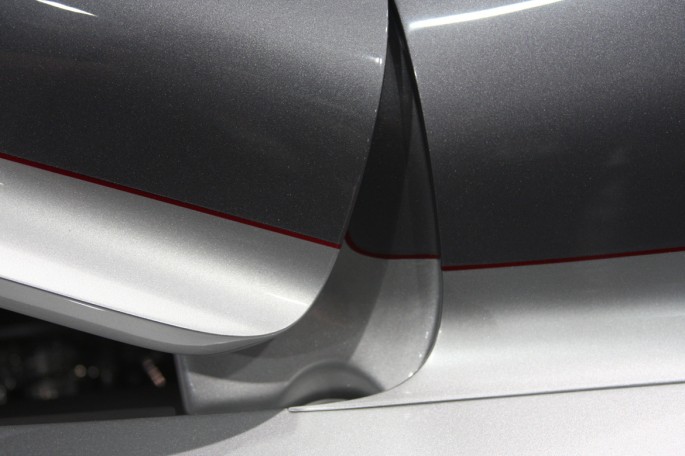 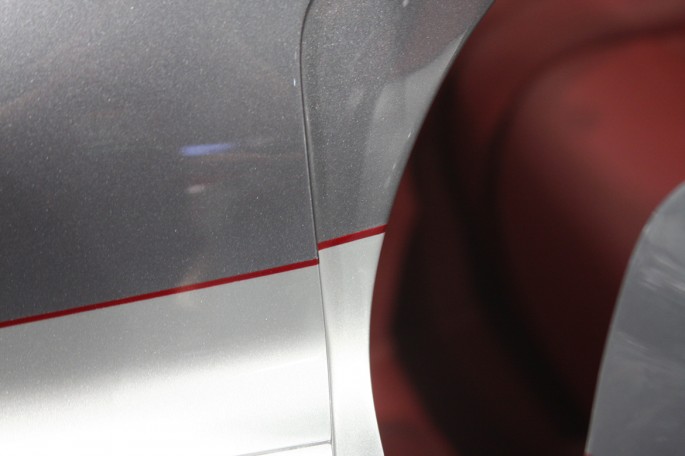 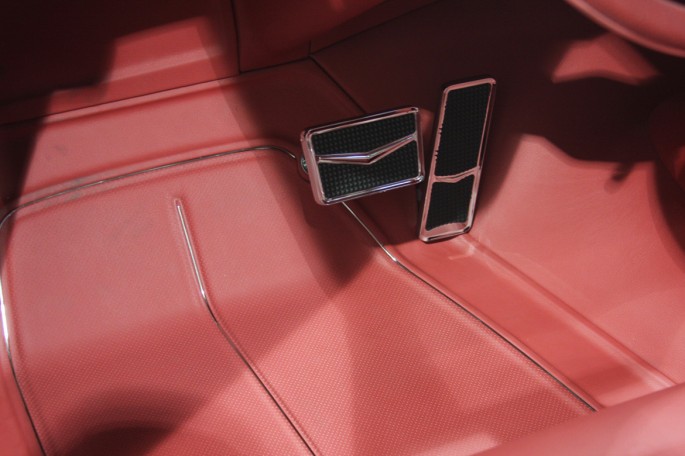 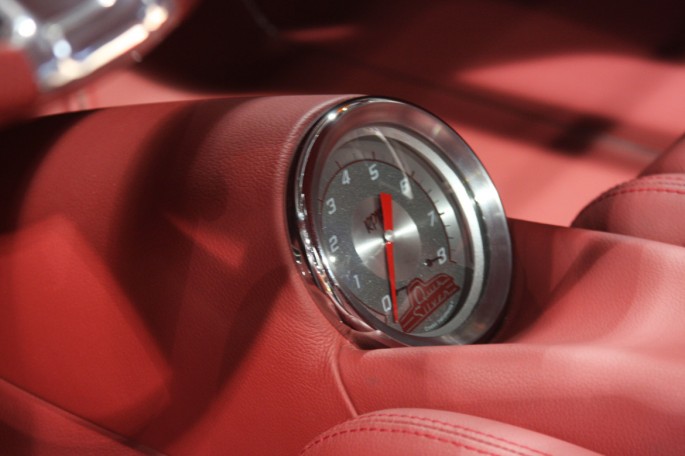 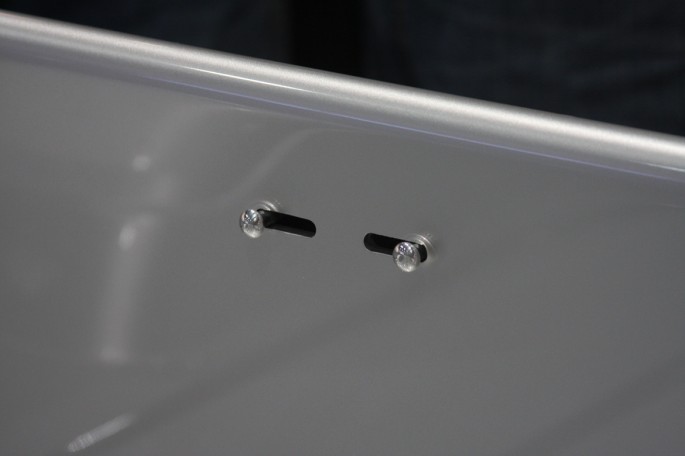 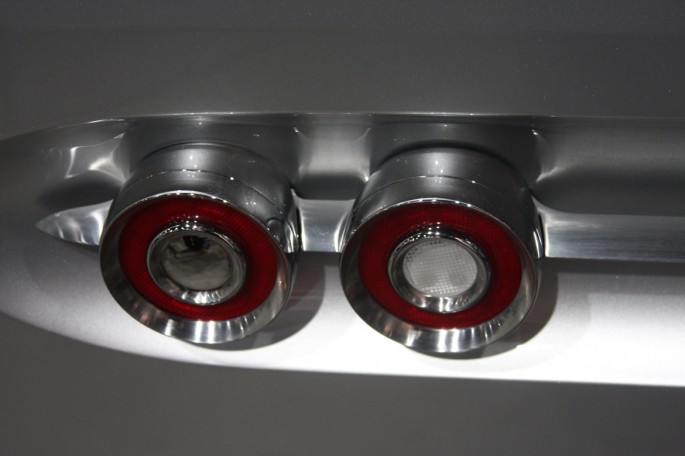 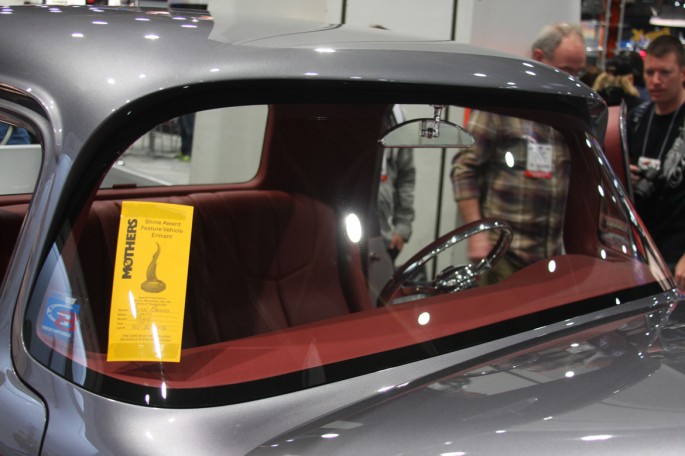 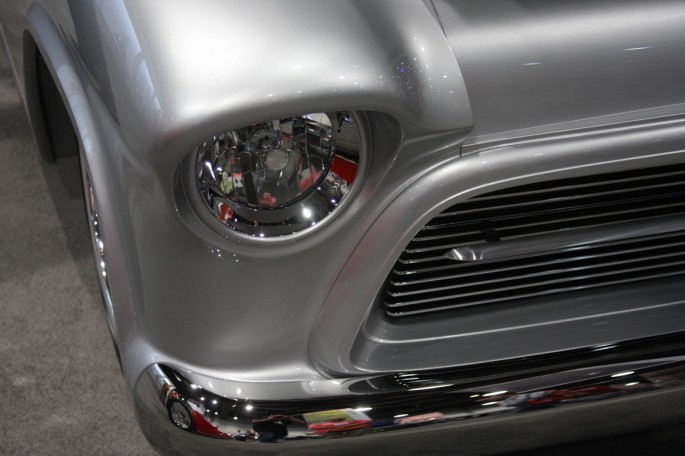 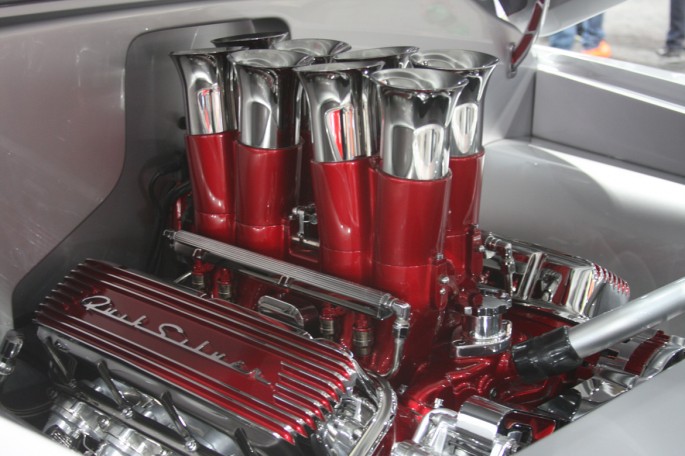 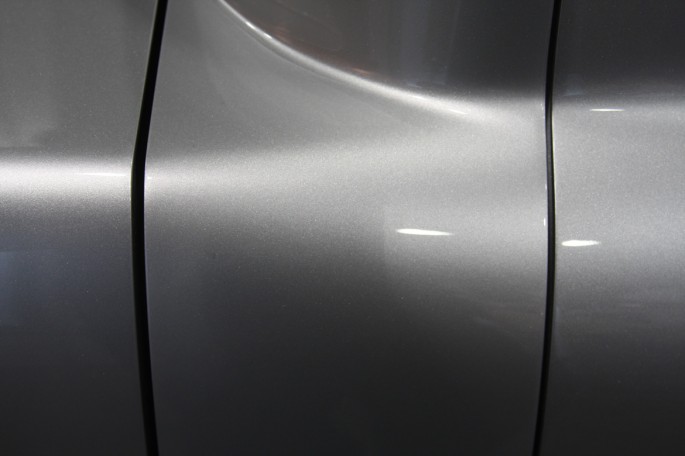 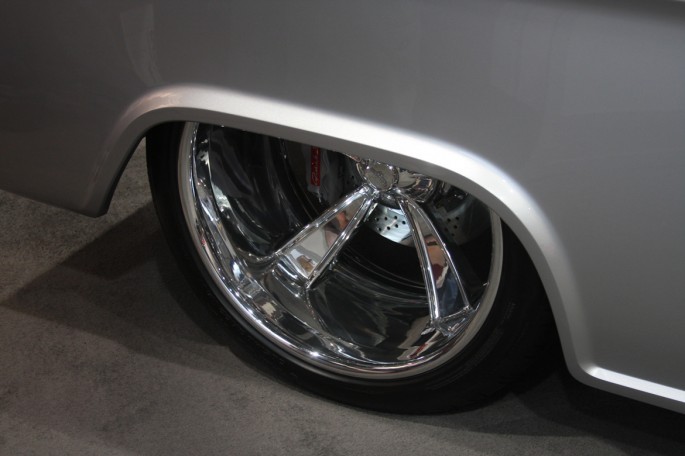 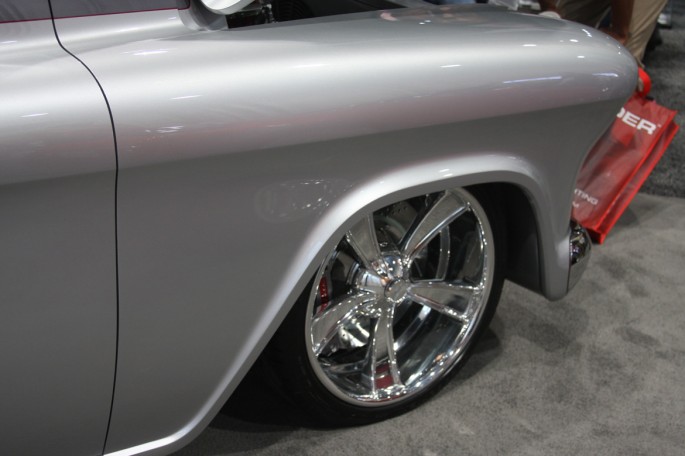 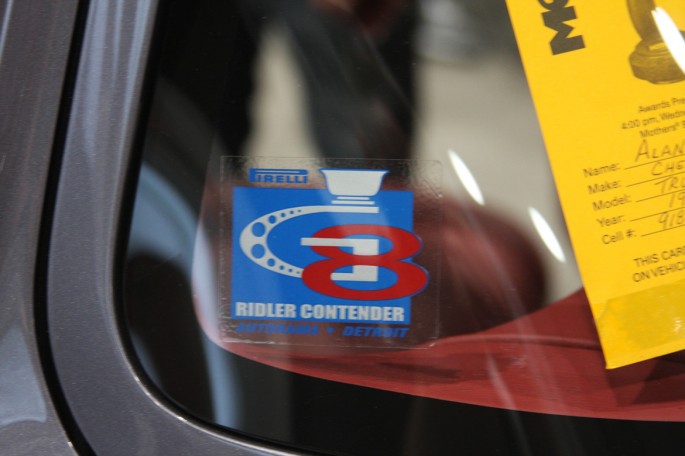