2020 Toyota TRD Pro: Long In The Tooth, But Not Much Else 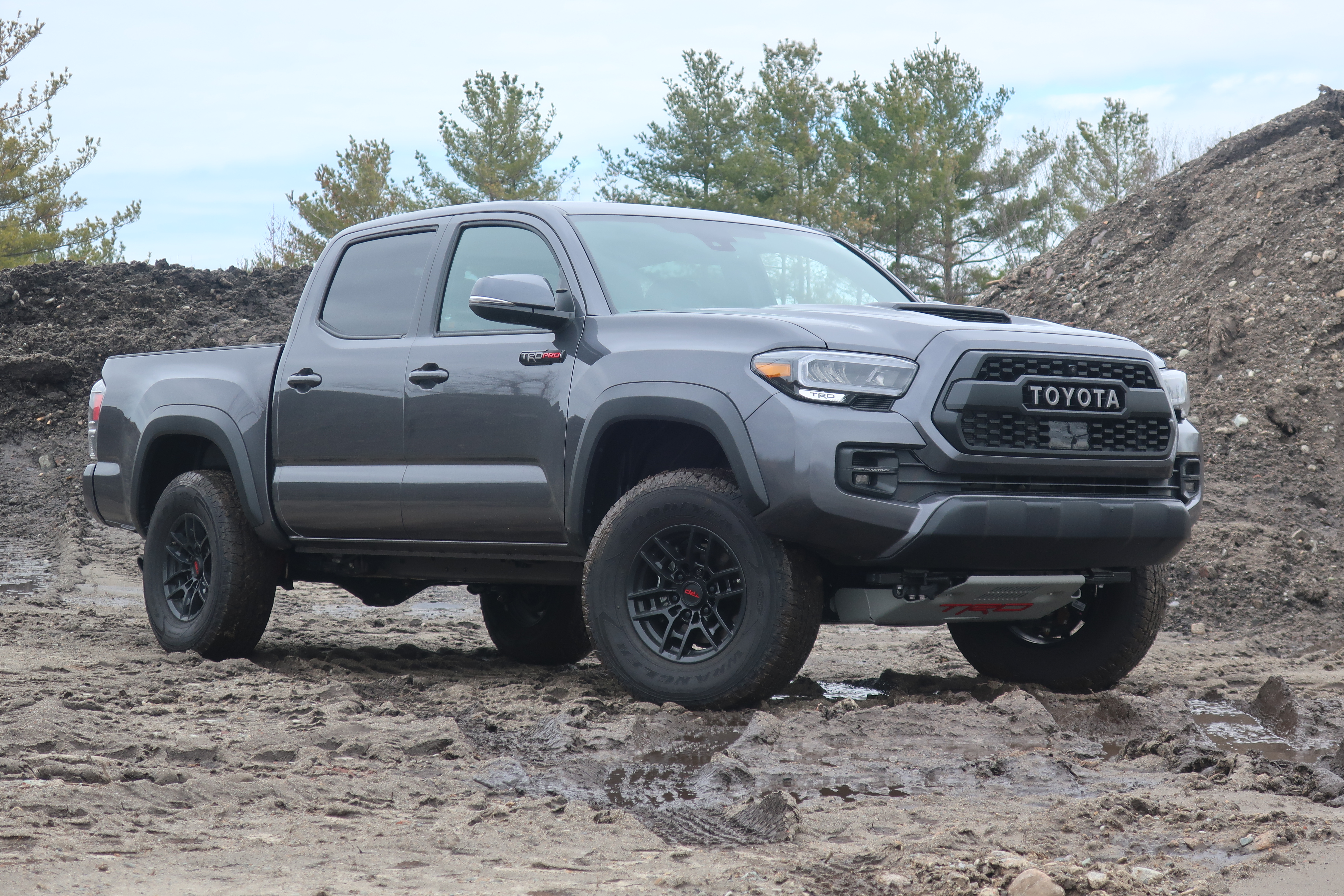 The 2020 Toyota TRD Pro is the latest in a long, long line of Toyota pickup trucks based on a platform that was introduced in 2005 and has been little changed since then. This off-road themed and equipped edition of the truck holds the most promise for an entertaining on and off pavement driving experience but in the end, several factors left us underwhelmed after driving the rig for a week. Perhaps we were expecting too much. The extra inch of lift over standard 4×4 models, the new lighter weight wheels, tougher styling, and things like lockers and remote-reservoir FOX shocks seemed to indicate on paper that we’d be cruising in the Raptor Jr. That’s not what comes across in the driving experience. 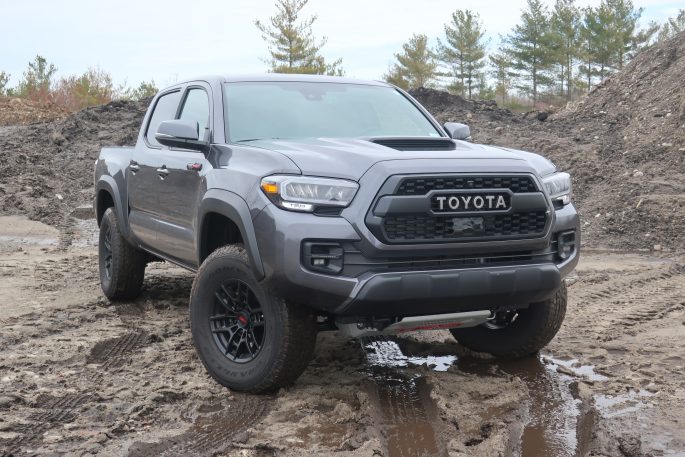 The truck has some of the same characteristics as the Raptor in the sense that the front end soaks up bumps and chuck holes masterfully but when the rear end hits them, it acts like any normal pickup with no load on it. The result is a truck that gives an oddly “nose heavy” feeling when driving on the road. It dives hard forward when the brakes are strongly applied. While we never felt like control was suffering when driving, it was not a comfortable or normal driving dynamic. The Raptor carries its pre-runner style ride qualities front and back. The Tacoma, not so much.

Some of the TRD content under the truck alone with the shocks are a TRD skid plate up front (which comes with a set of directions for oil change access, and TRD exhaust which provides more tone and free-flow than what is normally delivered on other Tacomas. Unfortunately the tone and sound that comes from it are generated by an aging 3.5L dual overhead camshaft V6 that doesn’t exactly make one crave more noise as much as they crave more power. More on that later. 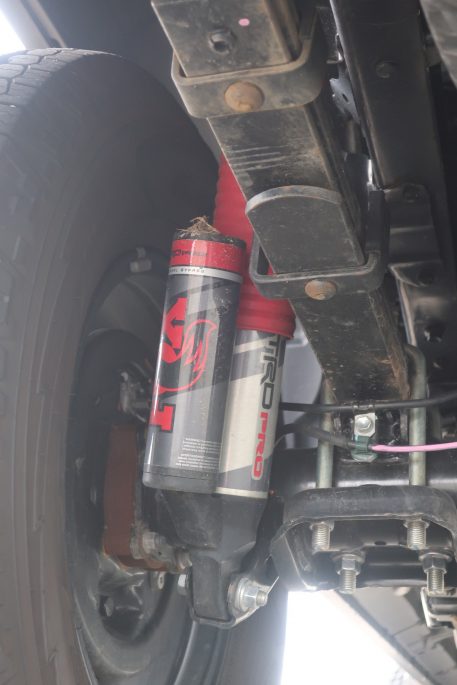 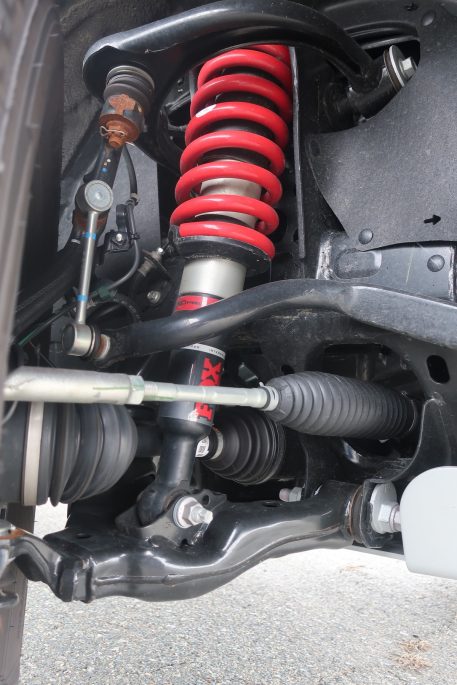 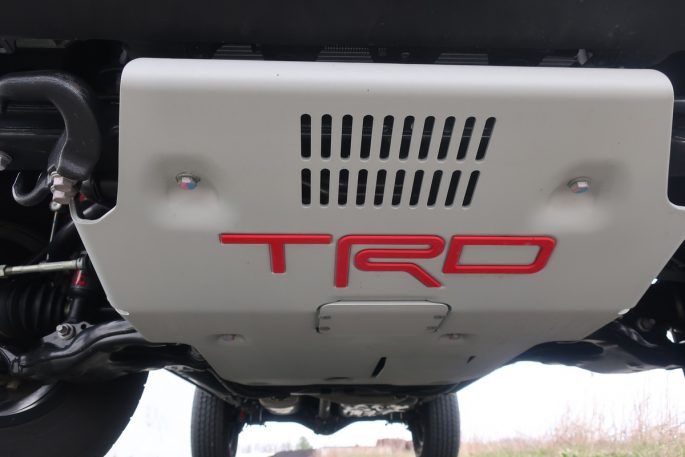 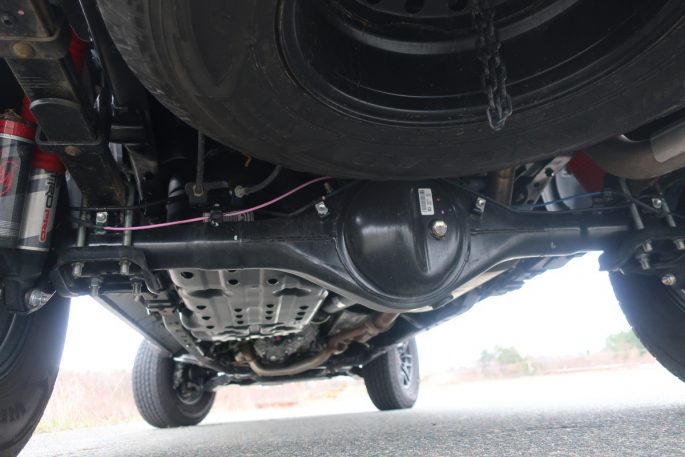 The main thing that bugged us about the Tacoma and has bugged us about these trucks for some time is the entry and egress as well as the driving position. Keeping the floor flat and without a depression for more foot/leg room creates a weird position when seated. The seat itself is low and without the depth of floor the driver’s legs are far more straight out than in a normal truck. Not having the depression in the floor also creates a situation where getting in and out of the thing is weird because the normal “step down” however small in most trucks is not there. We spent a week trying to adjust the seat into a lower position that it literally cannot achieve. 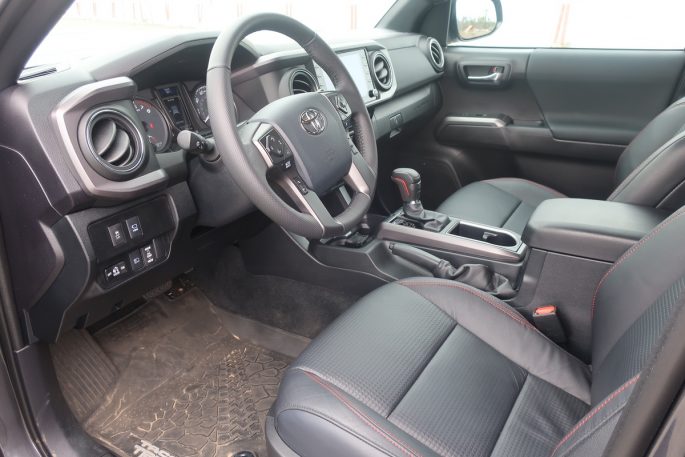 The TRD pro interior is nice enough with the logo embroidered into to the seats. The cab provides good rear seat room and while nothing is over the top WOW, it is serviceable and for longer rides, full-size people in the back won’t feel overly cramped or uncomfortable.

Cab noise is more than one expects to have in 2020 out of a new truck. As more and more manufacturers have worked to make their cabs into virtually sealed vaults, the Tacoma does not have that type of sound deadening. The interior noise was not awful but definitely stands out because it is noticeable where other trucks have done a better job of mitigating it. 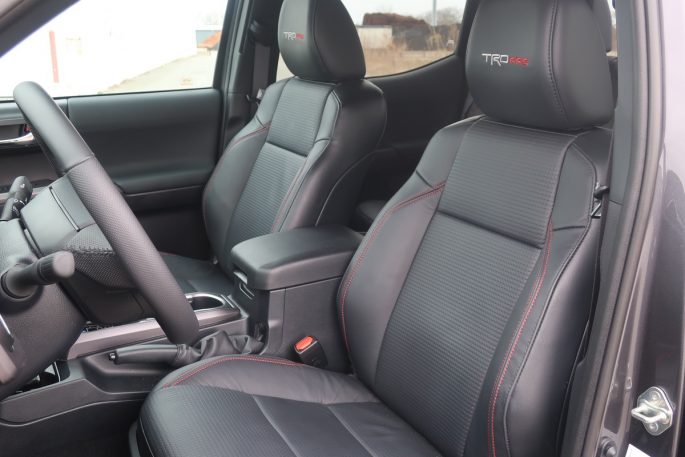 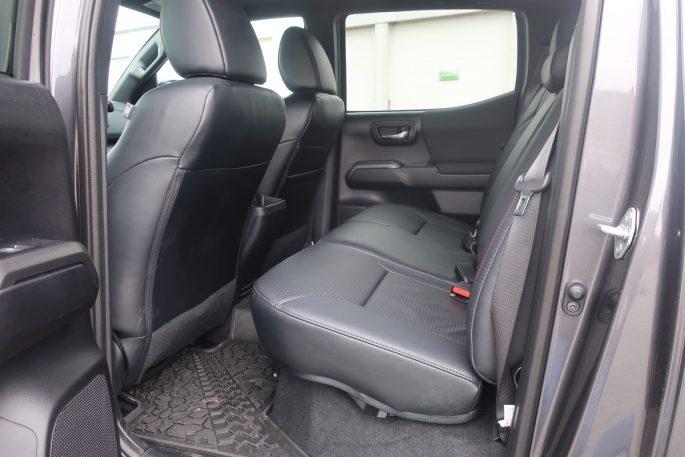 The driver has a multitude of controls for different four wheel drive functions. The truck has a locking rear differential, has an off-road crawling mode, among other gadgetry to make it more capable off-road. 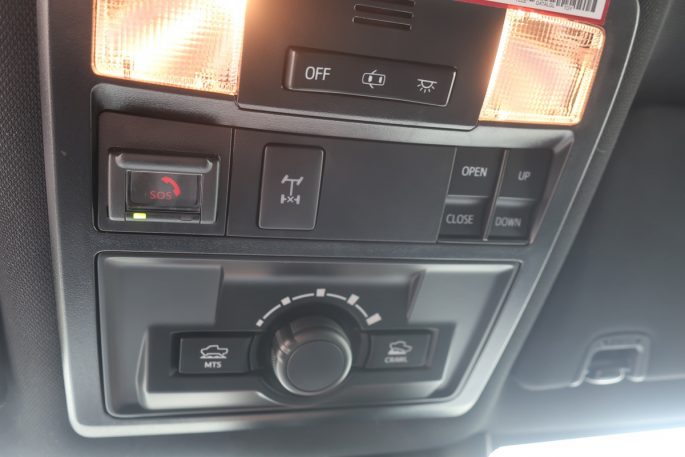 HAVC controls, gauges, and center stack are functional, very straightforward Toyota, and the 8″ infotainment screen was OK but certainly not revolutionary for a new truck in 2020. If the truck lacked this at it’s $46,000 asking price, it would be glaring. Today’s buyer expects this in the cab now. The JBL six speaker audio system was good and kicked out the jams with sufficient volume and with easy to use controls. 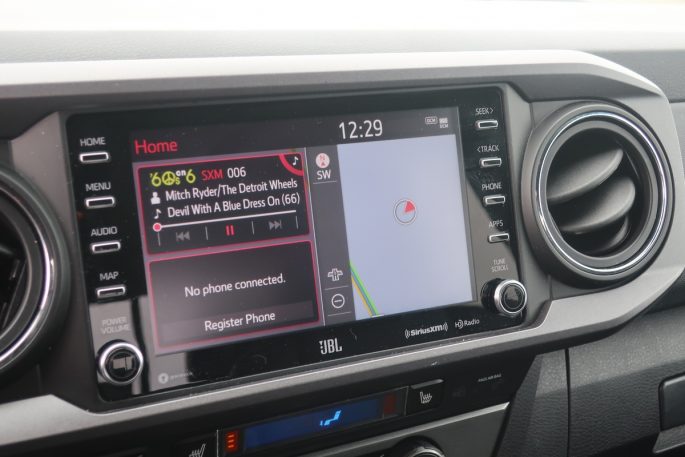 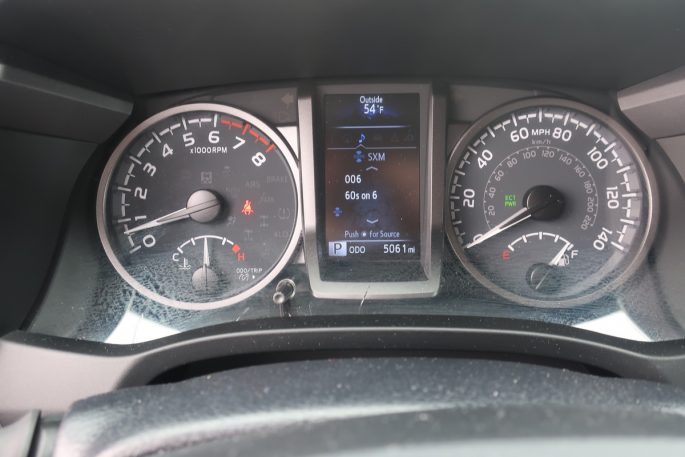 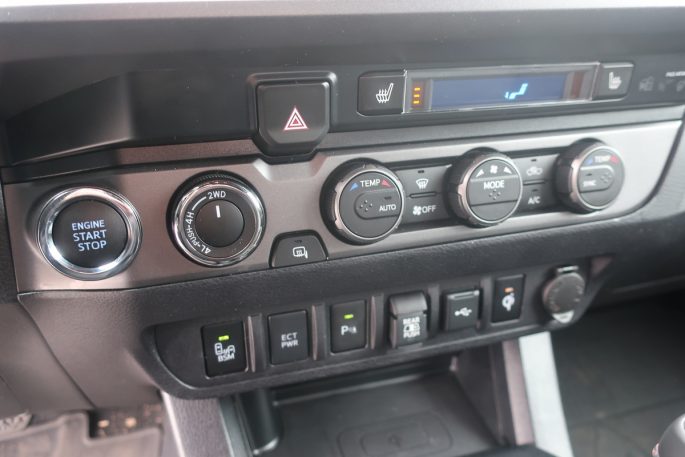 The main reason people keep buying the Toyota Tacoma is because of its reliability, resale value, and basic toughness. It it why Toyota has not messed with the basic formula since 2005. Yes, we know about the frame issues with earlier trucks but these 2005 and up trucks are tough and simple and they hang onto their value. The next area of this truck that left us wanting a bunch more was the drivetrain. 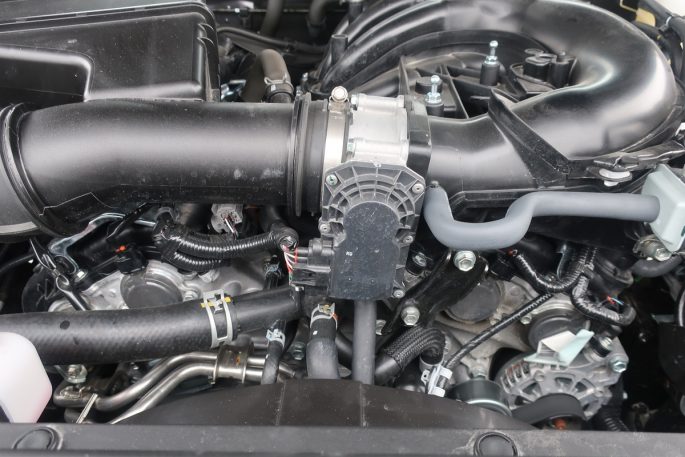 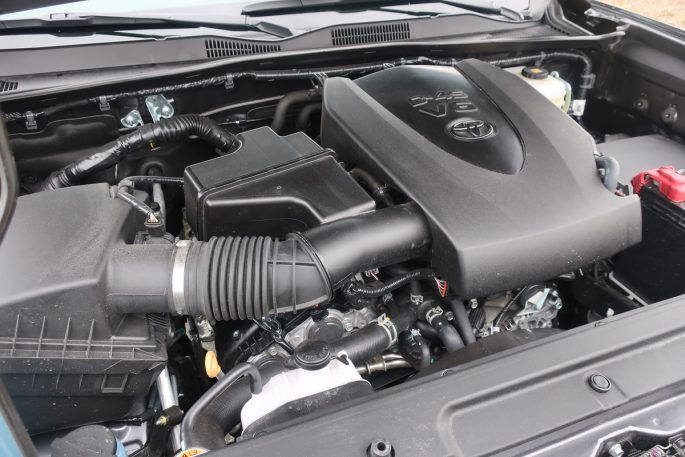 The engine is a 3.5L V6 that makes 278hp and 265 lb-ft of torque and it’s really underwhelming. The engine does not make great power down low and even though it is hooked to a six speed automatic, it just struck us as lazy for the entire time we were driving it. In order to operate this truck in normal stop and go traffic in today’s world, you find yourself driving it more aggressively. that should be necessary. Fuel economy suffers for this. Driving the truck in Sport mode and using the ECT (electronically controlled transmission) button which delivers the most aggressive throttle response and shift points the truck can offer. The lack of low end torque as compared to most anything else you’ll drive these days made the engine feel buzzy and weak. 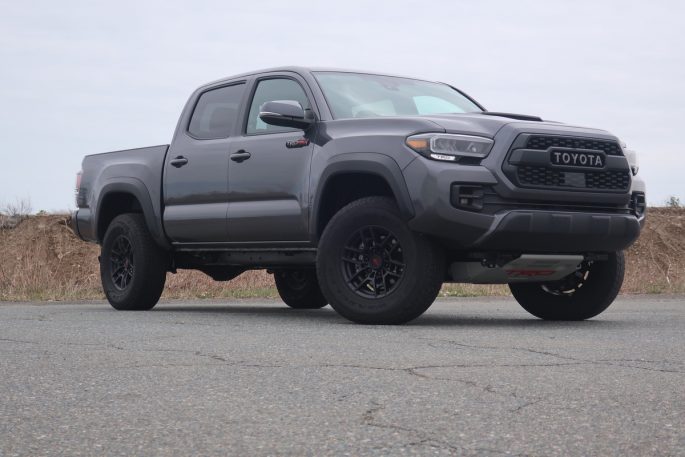 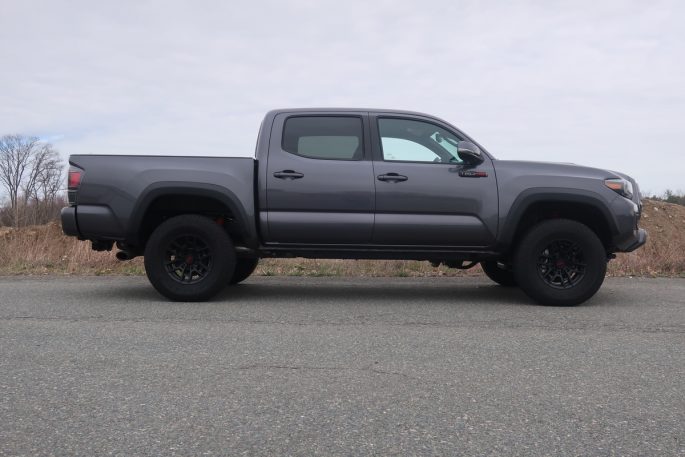 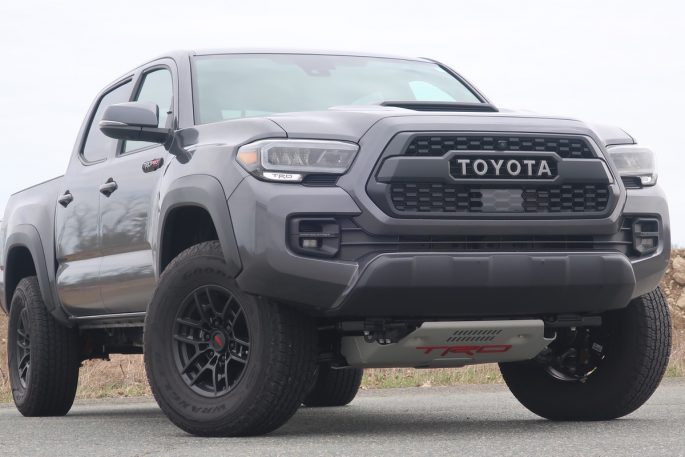 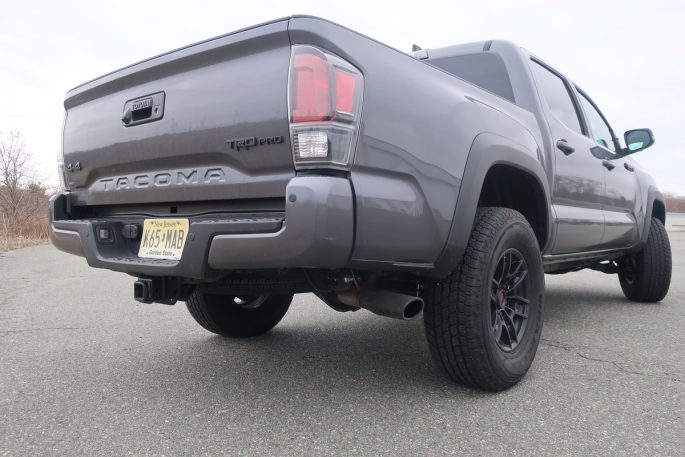 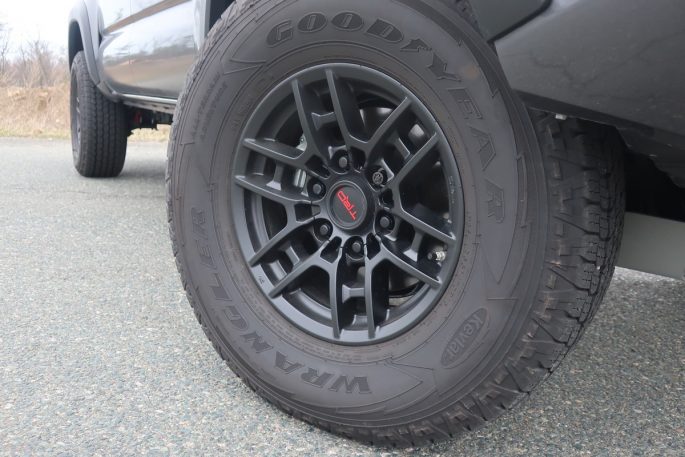 We did enjoy the styling of the truck and despite its rather low-key Magnetic Gray Metallic paint it got plenty of attention. The blunt nose, blacked out trim and bumpers, cool wheels, and muscular bulged fenders definitely make for the right aesthetic theming for an off-road truck. Rigid Industries lights are built into the front fascia.

The downside for us is that the on-road experience just didn’t deliver and that’s where the Tacoma TRD Pro will spend most of its life, no matter who owns it, hardcore off-roader or not. All that we have read from owners is that the truck is capable on the rocks and in the woods but if you are someone who commutes to work every day or does a normal amount of road driving between those stints in nature, we feel like there are better options for $46,665. 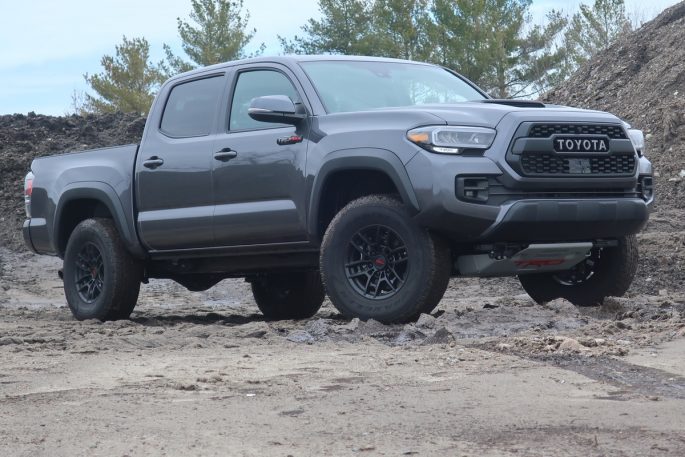 The bottom line is that the Toyota Tacoma TRD Pro is likely the best iteration of a truck platform that needs to be replaced to keep pace with its competitors in the marketplace. You can only make so many bolt-on changes to something that is fundamentally behind the curve as compared to the rest of the field. The 3.5L V6 is certainly a trooper but it’s a 2010 engine in a 2020 world. A turbocharged four cylinder can and would deliver capable power, more torque, and it would pair wonderfully with a six speed automatic, which is also a dated concept when it comes to transmissions.

Like an athlete who has lost a step late in their professional career it’s time for the Tacoma, this generation of it, anyway to head off to greener pastures.

This Footage From the 1995 Camel Trophy Shows Just How Grueling The Trek Was For Mundo Maya The Incredible Story Of A B-58 Landing With Busted Gear, 14 Hours Of Continuous Flight, And 8 Mid-Air Fuelings