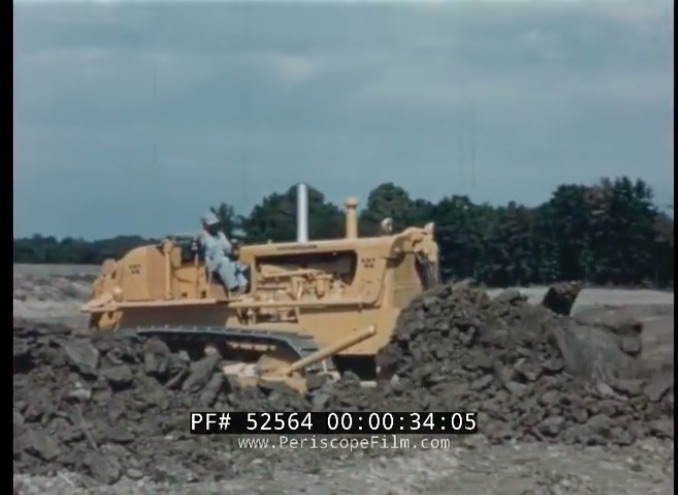 Nothing brightens my day more than vintage footage of heavy equipment at work. Seriously, that’s not a joke. Call me names if you will but I love this old iron as much as I love fuel dragsters and beer. Ok, fine. Not as much as I love beer but I love old bulldozers, tractors, and the like a whole lot. A WHOLE LOT. Caterpillar has been a leading name in the heavy equipment game for nearly a century now and by the time the 1950s rolled around, the company was hauling the mail in terms of new product, market share, and expansion. Like everything in America during the 1950s. People wanted more power, more size, and more ability to get the job done quickly. The D8 gave it to them.

Think of this. In the middle 1950s when this thing showed up, it had a turbocharged diesel engine and was offered with torque converter drive. The turbodiesel idea was pretty radical at the time. Heavy trucks were either naturally aspirated or had gasoline engines. These guys were making it happen. Yes, these things did not have the constant RPM swings that a road going truck did but the 225+ horsepower this baby made was big time stuff for the era.

This thing is shot in brilliant color and the narration is great. Seeing the engineers working on prototypes, testing stuff in the field, and watching the operators of the day go about their work is something else. While every advancement made in equipment helped the job of the operator, these were still back breaking machines to work on. You’ll notice a complete dearth of comforts outside of the new cushions that are bragged about. A functional back was likely not something an operator had into his 50s.

Love old machines like me? You’ll love this video.

One thought on “This 1950s Caterpillar Video Introduces The H-Series D8 Bulldozer – So Cool!”