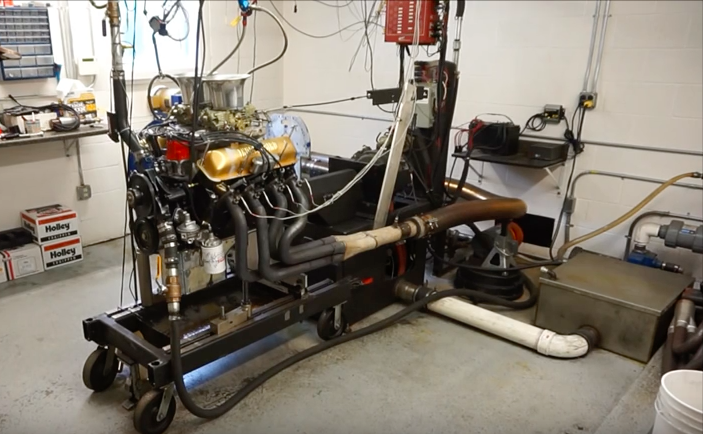 Isn’t it cool when you see an engine make great power with the “wrong” parts? Take this stroker 505ci stroker FE engine built by Barry Rabotnick of Survival Motorsports. Barry is a specialist with the FE engine family and that is what his company specialized in producing. In this case, the customer wanted to make some stout power but he wanted to do it with parts that would fit the old school build he is using the engine in. The result? More than 600hp and more than 600 lb-ft of torque at very usable RPM despite the fact that the intake manifold and ignition are not exactly what you would call cutting edge technology.

We love the looks of a Vertex magneto and an Edelbrock cross ram intake with a couple of carbs on it but those two pieces are not exactly seen as the modern path to horsepower enlightenment. Well, Barry proved that with the right tuning and setup, they’ll do just fine!

Here’s what Barry had to say about the engine:

Ford 427 based package. Vintage cool – solid roller cam, Survival heads, Edelbrock cross ram with 750 Holley carbs, Vertex magneto. Initial pulls with a traditional MSD before switching to the mag & skinny plug wires. Surprisingly (to me…) the mag was almost identical in power. Not an easy piece to tune, but ended up making 625 pounds of torque at 4600 and 642 horsepower at 6200. On pump gas. It is the highest horsepower cross ram FE that I am aware of.

Rumble Guts: This Naturally Aspirated Ford 632 Cranks Out 1,100hp And Big League Torque Remember Bigfoot and USA-1 Racing Down Lanes of Crushed Cars At Gateway Motorsports Park In 1983? Let This Video Remind You