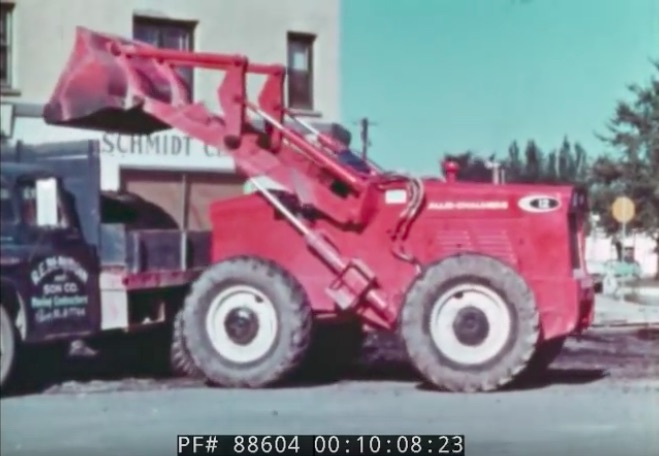 If you love old equipment you will really love this film called “This Town Sure Has Changed” and it features Allis Chalmers equipment doing everything from building roads to harvesting wheat and even running as alternative fuel vehicles. Seriously, the very first fuel cell powered vehicle in the world was an Allis Chalmers tractor and you can see it plodding along here.

Equipment, much like many things on Earth has changed over the decades, specifically how people buy it. Unlike the wide open decades of the 1950s and 1960s, there has been scads of consolidation out there which means that there has been a lot of brands which were once proud and are now nothing. Many brands are owned by the same few companies that sell them as different versions of the same thing. One of my fascinations with old equipment is the competitive nature of the companies making the stuff. They were constantly battling for business and their devotees were as into brand loyalty as anyone. Now? It’s largely a sticker game in many cases.

Check out these wide open, hot, sweaty, rude and crude machines that built America and the world by being operated by the toughest dudes around back then. Win.

Press play below to see this 1961 Allis Chalmers promotional video –

Don't Call It A Comeback: The 2023 BMW 3.0 CSL Harks To The Past With Big Power, Tech, and Balance WHICH IS BETTER-CNC PORTED STOCK LS HEADS OR AFTER MARKET CNC HEADS. TEA 243 HEADS VS AFR 245 HEADS!

One thought on “Old Equipment Video: This 1961 Allis Chalmers Promotional Video Rules All”