This 1972 Video Featuring Chevy Trailers And RVs Is So Cool – An El Camino With A 5th Wheel?! 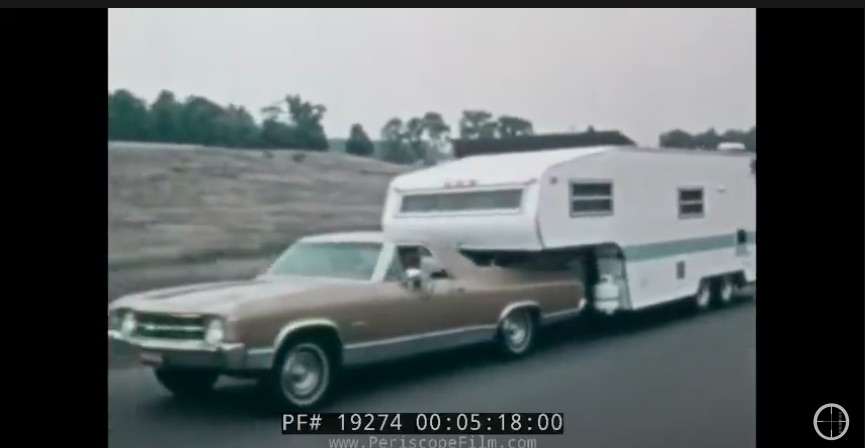 The recreational vehicle and trailer industry in the USA is booming. The pandemic saw many hundreds of thousands of families invest in an RV, a camper, a trailer, and all the stuff that comes along with it. While the industry has been up and down like any other over the course of its life, it was the early 1970s that saw the first true boom in the purchase of RVs and trailers. The OE auto manufacturers seemed to have a driving effect on this as well because of how they marketed, equipped, and pitched their vehicles to customers. The video you are going to see here. It is actually two, show some of the push that Chevrolet was putting behind what was then a booming recreational activity at the time.

You are actually going to see a pair of videos. The first dates from 1972 and the second slightly after. The both show more cars towing camper trailers than we have seen in 5 years of real life highway driving combined. Isn’t that weird? Today it is so rare to see a car towing anything but to see a smaller SUV, mid-size/large SUV, or pickup truck bounding down the highway with camper on its back is no big thing. Hell, we nearly fell out of our chairs when we saw the Elky with a fifth wheel as shown above! Oh, and make sure you stick around long enough to see the Caprice hauling the Air Stream.

The camping industry and the automobile making industry are linked very, very tightly. If you ever doubted that, you won’t after watching this.

Rare Flyer: The 1990 Olds Cutlass Calais International Series Quad Four Was Quick And Rare Is This The Sketchiest Trail Repair EVER? Flex, Rocks, And Rollovers Brings Us Crawlers, Carnage & Chaos at the Sand Mines!

2 thoughts on “This 1972 Video Featuring Chevy Trailers And RVs Is So Cool – An El Camino With A 5th Wheel?!”