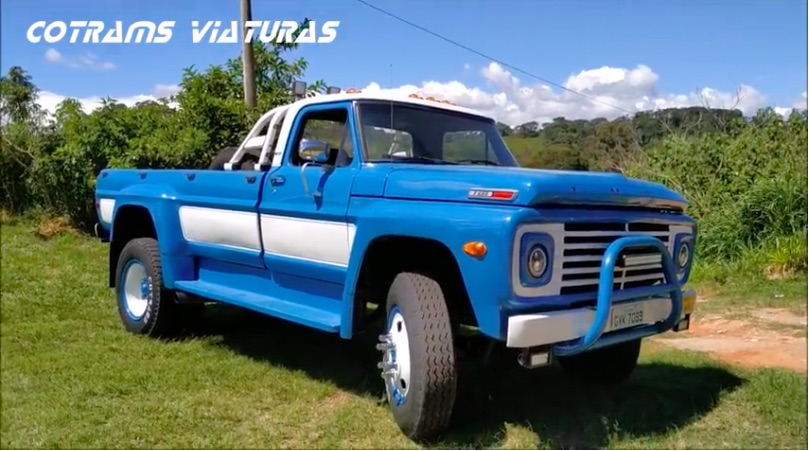 So today is my Brazilian kick, I suppose as this is our second peek into the car culture of that South American country and boy is it strong. Technically this is truck culture but you know what we’re saying. This video features a custom built 1973 Ford F600 pickup truck that is awesome in all the ways. From the cool two tone paint to the uncorked sounding diesel engine, the manual transmission, the roll bar in the bed, and the big rubber it rolls on, we’re kind of in love.

As we do not speak the language, this video was mostly about the visuals for us. We get a full tour of the truck, we get to ride in it, get to see and hear it from the outside as well. The engine is a MVM 229 series six cylinder with a turbocharger. MVM is basically Navistar’s southern hemisphere branch and this engine is an inline six that makes (stock) somewhere around 150hp. This one seems to have been upgraded with a larger turbo and stuff but we’re not 100% sure. The transmission is a 5-speed Clark unit and the truck has a blistering top speed of 85mph.

This is a really nicely turned out rig and I’d give a limb to cruise it down the road for fun. Taking medium duty trucks and making them into massive pickups is not just an American thing, it is worldwide, baby!

Freaky Fun Video: This Guy Turbocharged An Olds 350 Diesel And We Love It MAHLE Motorsport Introduces PowerPak Piston Kit for Porsche 996 and 997