Canadian Largess: This 1988 Peterbilt 379 Has A 4,000hp Compound Turbocharged C15 Caterpillar In It! 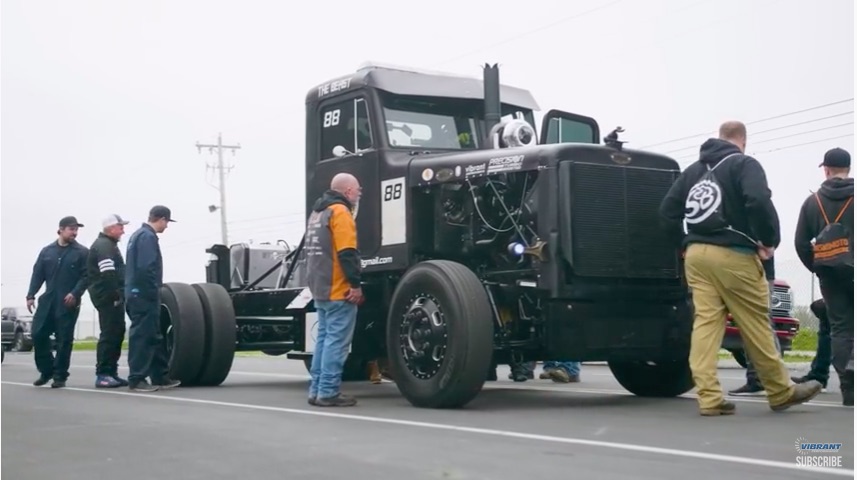 We love the old saying that, “there’s a fine line between hobby and mental illness,” because it kind of defines hot rodding and hot rodders in general. Take Mario Monette from Alberta, Canada for example. This dude has built a 1988 Peterbilt 379 drag truck that makes a claimed 4,000hp and 7,000 lb-ft of torque. He says the truck runs 11s at more than 120mph when things are all going in the right direction.

This beastly truck uses a compound turbocharged C15 Caterpillar engine that stacks a 118mm turbo on top of a 105mm turbo to create 125-150psi of boost. Yeah, no kidding. We do not know if the horsepower has ever been measured anywhere but an engine this large with that much boost and fuel going through it is surely going to make ginormous amounts of torque and horsepower. The engine is hooked to an 18-speed transmission which Mario bangs through the gears of as the truck is going down the strip.

The rear suspension is pretty awesome. The thing is a massive parallel four links with custom rod ends on the bars that weight 23lbs a piece. There are some pretty trick looking shocks out back trying to keep hold of everything and the rig uses four, out ’em four drag slicks out back. We had never seen big rig dually slicks but there they are, in front of god and everyone.

You may not love it but this thing is one man’s high performance dream come to life. What do you think of this black monster from Canada?1988 Peterbilt 379 Has A 4,000hp Compound Turbocharged C15 Caterpilla

The Sound Of Money Disappearing: The Ferrari 250 GTO Crash At The 2017 Goodwood Revival OPGI's Pre-Columbus Day Sale Means That You Can Save 15% Off Thousands Of Parts!