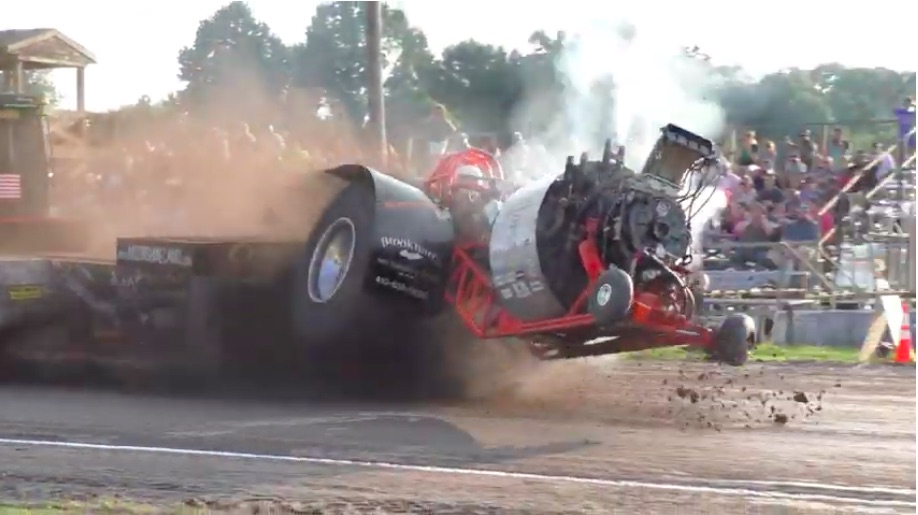 Pal of BangShift Brian Lively sent this great video over to us the other day. This was taken at the Lucas Pro Pulling League event in Bel Air, Maryland. The video gets off to a legitimately accurate “flying start” when the Radial Reactor tractor has issues on the first hook we see in the footage.

The aircraft radial engine sounds awesome and clearly makes huge power. The machine gets the nose up and then moves to the left of the course. The driver pulls out all of the tricks he has at his disposal and the end result is some craziness when the bouncing tractor breaks the front end, goes on a short flight and then comes to rest having separated from the sled itself! The safety crew was right on the scene and the driver was fine.

You will then see a succession of hooks made by various other 7,500lb tractors and the big fun here is the variety of power plants. Multiple V12 engines, a single alky burning Hemi with a blower, and the list goes on. The whole video is not a carnage fest just the beginning and what’s totally wild is that the first tractor we see is one of the last as well because it comes back to hook again…with a busted front end.

The reason the tractor came back was because the sled was reset and the driver is chasing the series points. He needed to at least hook and move it an inch to get points for participating. He eases the machine ahead and shuts it off instantly. It pulls 13 feet but the mission was accomplished as far as getting those championship points is concerned. The Reactor will be back soon, we know it!

Revive The Revived: Dylan McCool Brings The Ravine 'Cuda Back Into The Light! Route 66 Cruisin' Reunion Photos: Real Cruising On Route 66 In SoCal!