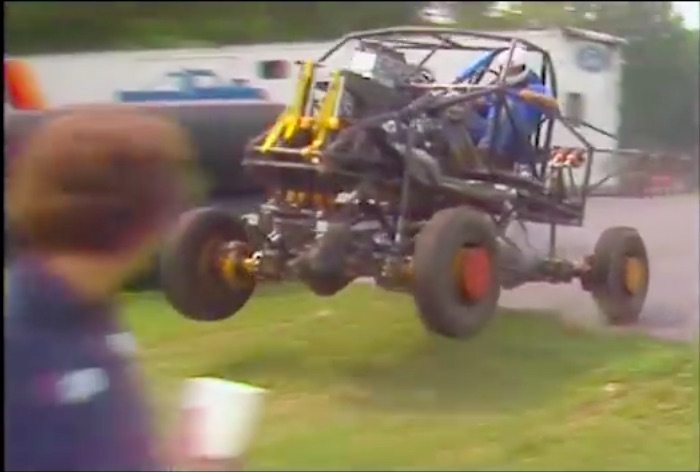 Every motorsport on Earth evolves, that’s basically the hallmark of anything that is technology driven, right? Indy cars went from basically being horse carts with powerful engines to the high-tech wonders today. Drag racing started out as a sport where guys at corner gas stations dominated and has morphed into a big league sport at its highest levels. The same sort of “progression to professionalism” has been happening in the world of monster trucks since their first showed up in the early 1980s.

The video below is awesome because we are seeing something really neat. What we are looking at is the legendary Jim Kramer and Bob Chandler of Bigfoot Monster Truck fame testing the base chassis of Bigfoot 8, the most advanced truck that the Bigfoot operation had built to that point. How are they testing it? The old fashioned way, by driving around their parking lot, jumping curbs, and leaning into the motor as best as they can.

Our favorite part of this video is the fact that this truck has an advanced chassis, some killer suspension, and PREDATOR CARBS still top the engine in the front of the rig. How great is that?! We bet Bigfoot sold more Predator carbs than anything in the history of that company ever did. It was a signature look to see three of them climbing through the hood of a Ford nose back in the day.

Today all of the big boy monster trucks are mid-engined. Why? The balance of the truck is far better that way, they fly more evenly, and we guess it makes sense. Whitely truck we see in this video was no longer “a truck” so much as it was a tube chassis beast, it very much looked like a truck when it was done.

A great look behind the scenes, “back in the day.”