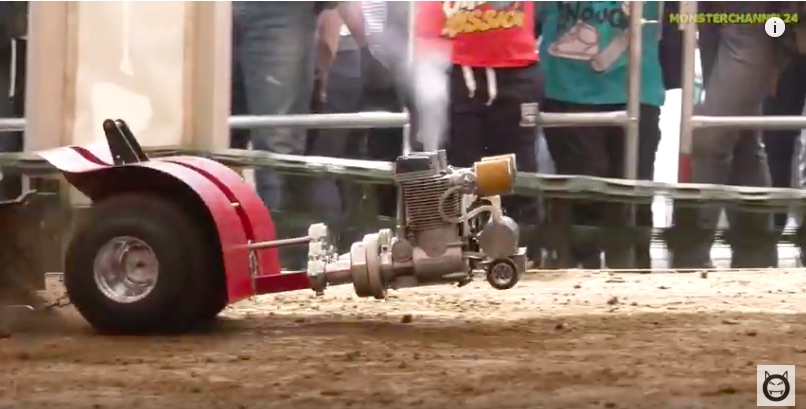 Back before the world of video gaming, miniature racing was the real hardcore alternative to full-sized competition. High end remote control cars and boats are still raced by hardcore RC fans and while iRacing has really drawn thousands and thousands of people into virtual motorsports, there are other alternatives in the miniaturized world. One of the coolest in our opinion is remote control pulling. This video stands as proof of that because we get to see multiple engine tiny tractors hooked to a scale sled and put to work just like their larger brethren.

While it seems cute to watch these tractors, consider the work that has been put into them. The multiple engines are tied together in the same what that full-size modified tractors use. The engines each have a driveshaft that runs into a big transfer box that takes the power of both mills and combines it before sending it out the back with a single driveshaft to the axle. The pitch of the engine is kind of like a normal mill on helium, but the little machines act the same. They use weights to balance the tractors just like the full size stompers do.

The only real difference? The rear tires grow a TON on these little tractors because they have pliable sidewalls and they generate loads and loads of wheels speed. Along with the multipole engine pullers there area couple of trucks shown and even some miniature pro stocks as well.

Press play to see these angry little tractors pull the sled like the big boys!

Watch The Most Bizarre Pro Mod Race Ever - Both Cars Break and Coast To Identical 31-Second Elapsed Times Wild Video: Watch The Hydraulic Cylinder In A Dump Truck Explode Under Pressure - Insane!