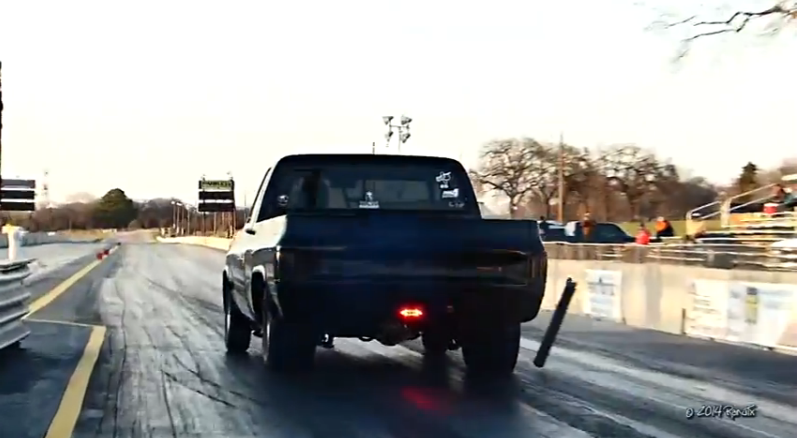 There are certain rules that lots of racers like to scoff at. Replacing belts every couple years is one of many that annoy people and make them believe that there’s some sort of conspiracy out there to liberate them of their cash. We certainly understand that viewpoint (and maybe in a case or two actually agree with it) but the fact is that the majority of rules in the book were put there after someone got hurt or worse on the track. This very powerful and potentially very fast Chevy pickup learned the power of a driveshaft loop while running at a well prepped outlaw track in Texas recently.

You’ll see the truck rip off a smokey burnout and then creep to the line to stage. The truck comes up on the two step, the driver lets go of the button and within about 20 feet the long tube that was connecting the transmission to the rear end violently leaves its assigned post. We’ve never actually seen one shot out this hard at such a low vehicle speed. Obviously Buford barfed a driveshaft at us a couple years ago on the dyno but that was at about 125mph, not just off a drag strip starting line.

Had the truck been equipped with proper driveshaft loops, the thing would not have come out like it was blasted with C4 explosive and it would not have smashed into the side of the truck as it was flopping around. If the driveshaft had gone left and mangled the starter or someone standing in that general vicinity we wouldn’t be looking at this video with wonder as much as we would be with terror. At the end of the video you can clearly see whatever stub is left from the front end of the driveshaft kind of flopping around behind the transmission as racers and others are screaming at the guy to shut the truck down.

Moral of the story? Outlaw or sanctioned, the track itself doesn’t care what it breaks or how it breaks it. Follow basic safety rules and you’ll likely never have a problem,