Short Wheelbase, Long Crash: Check Out This Mini-Mod Getting Piled Up In Germany 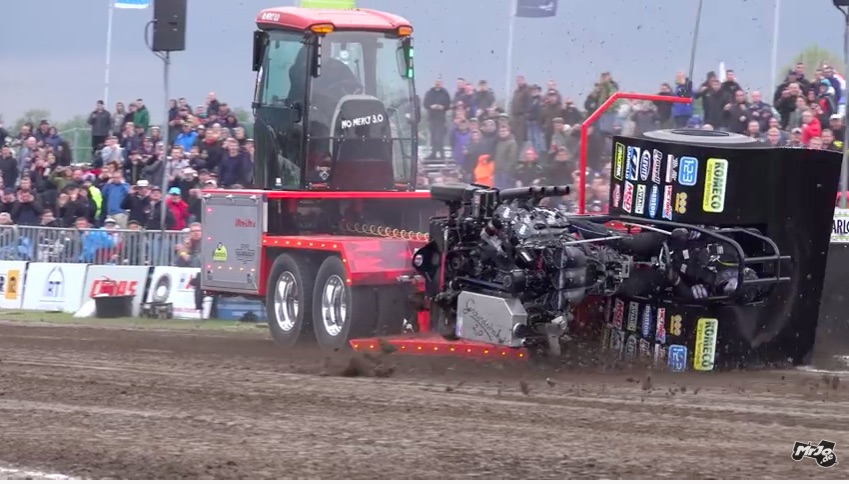 Tractor pulling season in on the wane at this time of the year in both the USA and Europe. That does not mean that the action is any less intense, though. The video we’re showing you here came from Germany and it shows the worst nightmare of any puller, especially one in the Mini-modified tractor. Those hellacious little bastards that have the same monster blown alcohol engines that far longer machines use but lack all of their weight, girth, and wheelbase.

The name of this tractor is the Groundshaker and it could very well be renamed the Boneshaker because the driver gets his ass kicked in this one. As can be the case in these situations, the tractor gets into a bigger wheelie than any puller wants to see and as the driver tries to get it tamed down, a violent oscillation begins and the end result is the sled smashing into the tractor with ferocity and the machine, which had a good head of steam sliding roughly on its side down the course.

Safety and fire people are on the scene immediately. Pay attention to the driver, especially in the replay because it’s a classic example of why these guys have all the gear, the belts, and the cages they are supposed to have. Lacking those, this man would have been in bad, bad shape.

Pulling. Just hook and go! How could it be so hard?! It’s freaking hard. It’s dangerous. Its a motorsports that we love around here.

Brutal Crash Video: Watch Rex Beach Pile Up A Supermodified At The Copper World Classic In 1997 - Supermods On The Mile?! Uncovering Original Paint With Oven Cleaner! This 1934 Ford 5 Window Gets Even Cooler!