May 27, 2021Brian LohnesBangShift News, BangShift XL, FUNNY STUFF, HISTORIC, Videos, XL VideosComments Off on Tired Of Your Weak Little Chainsaw? Just Add Nitromethane To The Tank – This Video Is Awesome 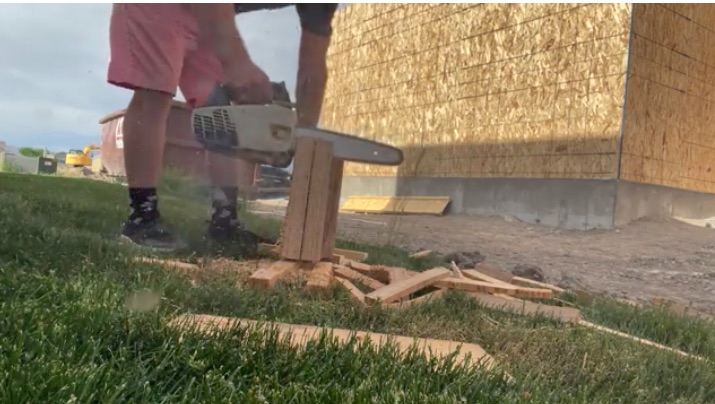 There are plenty of guys who hot rod chainsaws, right? There’s competitions around the country for saws that have all different types of engine swaps all the way up to V8 saws. This is not about that though, this is about taking a little saw that may not have the guts you want and waking it up with the greatest fuel known to man, nitromethane. The saw here is a little Stihl MS192T that has been unaltered outside of a carb swap to allow more air and fuel into the little two stroke engine. We’re guessing it is simply a carb off of a larger saw as it seems to fit into the “stock” cowling around the engine that was originally delivered with this sucker.

As you will see, the performance increases from burning 91 Octane to E85 and a touch of nitro, to the 15% nitromethane are pretty stark. The cutting time through a uniform wooden beam is effectively cut in half and then some by the time this dude is done mixing and tweaking. You will hear him say that he has to allow more and more fuel into the saw as the nitro percentage goes up and that’s obviously correct as burning nitro in volume is how you make power whether in a saw or a top fuel dragster.

We’re not saying that this is a good idea for the longevity of your chainsaw, so take that in mind, but we are saying that if you are of the, “Here for a good time and not for a long time” mindset, you’ll love the sound and performance of this saw as it drinks some of the good stuff at a fairly low percentage. Fun!

Wider, Softer, Better? The Upcoming M4 Convertible Tackles All The Design Shortcomings Of Its 430i Little Brother Making History: Watch This Incredibly Brilliant And Simple 1900s Ratcheting Wrench Get Made From Scratch - Awesome Skills