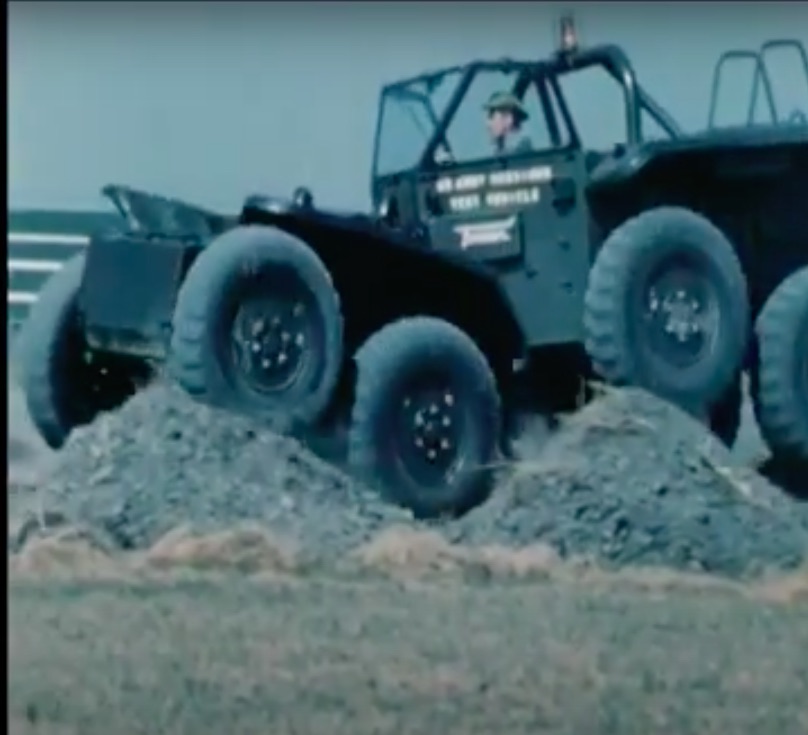 Yeah, if that lead photo hasn’t gotten your attention we cannot help you here. This is the Lockheed XM-808 Twister, one of two such examples of this conceptual platform for a fighting/troop transporting vehicle that could operate on seemingly any terrain including water. Ultimately only the two prototypes were made and the project came to an end.

Believe it or not, they actually out performed the parameters that the government and military had set forth but they were so complex and advanced there were a lot of concerns as to how effectively they could be maintained and used in the field. Were are not sure that we’ve ever heard of a project working too well but honestly that’s kind of the story here.

You basically have two separate units hooked together here. Both of them had their own diesel engine and each of them were four wheel drive, giving the 808 it’s eight wheel drive capability and completely mental levels of articulation. Seeing this thing drive over huge dirt humps, go rocking across a lake, and then climbing out over a huge berm is just impressive. Driving the thing must have been beyond fun.

There was kind of a fighting version made with a cannon on it and another made with the idea being that it could haul soldiers into hard to reach places with some armor around them. We’re pretty sure that if this thing went into production and the bad guys say it coming, they’d have dropped their guns and ran!

Before finding this video we had never heard of the XM-808 Twister. Now we’re obsessed.

Will The Next Challenger Be An Alfa-Romeo Or A Jaguar? No, We're Not Really Kidding Watch LIVE: The World Super Pro Challenge From The Mid-Michigan Motorplex! Historic Big Money Bracket Racing!