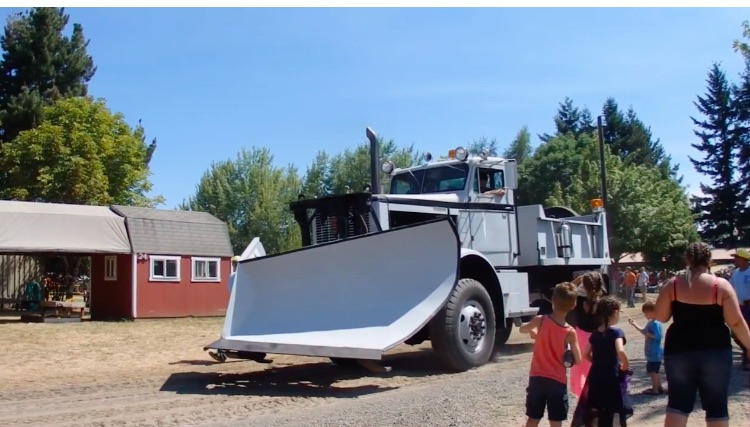 Today we’re coming in hot with a truly massive rig in every way shape or form. This video shows a vintage Oshkosh truck that is fitted with a V-plow large enough to cut a swath through a concrete bunker, it weighs as much as some small islands, and the engine is one of the larges gasoline burning engines ever installed into a truck. Beastly? Yes, this is exactly that.

We are guessing that this Oshkosh truck dates from the 1950s as the massive Hall-Scott engine in the front of it was made for WWII era vehicles and working rigs after that. The inline six cylinder engine (as mentioned) is 1,090ci which works out to 17.9 liters. It was rated at 240hp. You’ll see that there were dual plugs used (weirdly they are placed on opposite sides of the block) and this one is straight piped, so all the glorious sounds of combustion are sent right up the stack. The torque production of this thing has to be exponential in relation to horsepower. Used in vehicles like the massive M-26 “Dragon Wagon” during WWII, they were tough, reliable, and in many cases, unstoppable.

This truck is four wheel drive and while we do not know the origins of where it was originally assigned, one can guess it was working in mountainous areas where blunt force trauma was needed to blast through drifts and deep banking left after storms.

You will no get the true scope of the truck’s size until you see it in the late part of the video, idling through the crowd and other vehicles at a show. A monster!

Press play below to see this old and massive Oshkosh rumble along!

Want To Upgrade The Standard Truck Floater Axle in Your Drag Car? Mark Williams Has You Covered! The Bodybuilders: This Early 1970s Film About Fisher Body And Their Plants Is Amazing