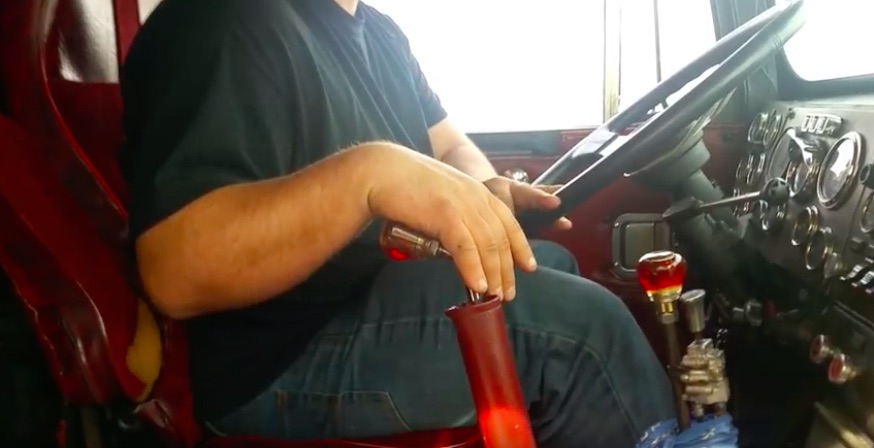 The automatic transmission has started making inroads in the trucking industry and there’s likely two fold reasoning for that. The first is that the technology has gotten better and the second is that the in coming crop of drivers have gotten worse. When you watch the driver in this truck work the 9-speed primary transmission and 4-speed auxiliary like it is butter you’ll understand what we mean. We hate to be the “these damned kids” type of guys but the reality is that “these damned kids” have never been exposed to a stick shift in their lives and the equipment cost of them tearing trucks to pieces is such that automatics where they can select a gear and then steer the thing down the road is the cheaper way to go. Sad but true.

Anyway, after that rant we are going to send your attention below to see this driver expertly work the pairing of transmissions in a V8 powered 1980 Kenworth. We’re not sure if that is a Caterpillar V8 or a Cummins V8 but either way, there’s monster amounts of diesel torque working this rig down the road.

This thing would appear to have 36-possible gearing combinations with the 9-speed and the 4-speed but the real number is larger than that because as you can see, the thing has two speed axles in it as evidenced by the button attached to the stick of the primary transmission. Knowing this the number effectively doubles, right? Low and high range on 36 speeds is 72! We’re guessing that either the aux box or the two speed axles don’t get used that much.

This right here is some classic truck driving. A skill that is diminishing slowly, one day at a time.

BangShifty Video: Watch A Guy Build A Mini-Nitro Motor Powered Generator From Scratch! Classic YouTube: This VW Golf Gives A 350Z And A Porsche A Great Lesson In Humility!