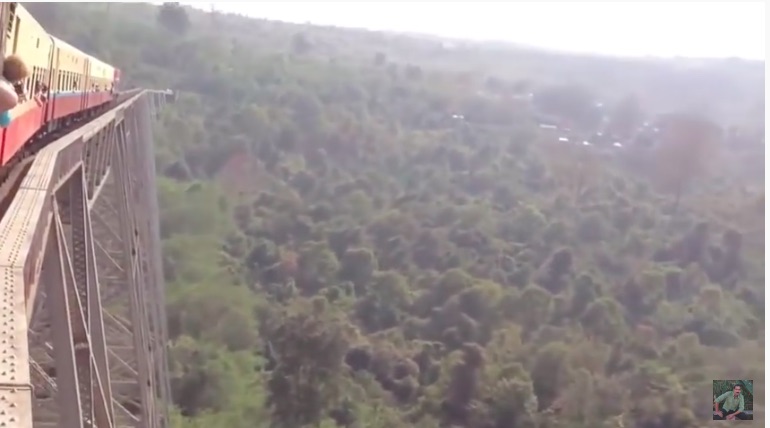 Our first reaction upon seeing the Goteik Viaduct train crossing was “no thank you” and then we read more about it and became enamored with its history so we’re kind of wanting to go check this thing out now. It is one of the world’s engineering wonders and the fact that it was built 120 years ago is so freaking nuts we can hardy believe it. Why? For starters the location. This trestle is in the country of Myanmar, which is tough to get to in 2019 let alone 1899 when construction started!

Nearly a half mile long and over 800ft high, the structure was designed, engineered, and constructed by the Pennsylvania Steel Company and incredibly every part of it was made in the USA and shipped to Myanmar to be assembled into the finished product. We say incredibly because just the logistics of this operation that was all done on hand ledgers, the ships that sailed the stuff over made  harrowing trip, and the end result is that one of the world’s great trestles still handles two passenger trains a day.

When built, Myanmar was a part of the British Empire and they wanted the railroad to increase commerce and all the other business benefits that it brings. Back in the 1970s there was (and in various violent and dictatorial political forms, continues to be) unrest in the country and the big bridge was a worrisome target for terrorists so the government paid to have an alternative route built for trains in the event that the bridge was disabled. Carved out on the jungle floor and made of a sinuous series of switchback turns, the alternative has seen been abandoned and the jungle has reclaimed the land.