Don’t Think It Would Be Fun To Drive A Pulling Tractor? This Video Will Change Your Mind

Oct 20, 2022Brian LohnesBangShift XL, XL VideosComments Off on Don’t Think It Would Be Fun To Drive A Pulling Tractor? This Video Will Change Your Mind 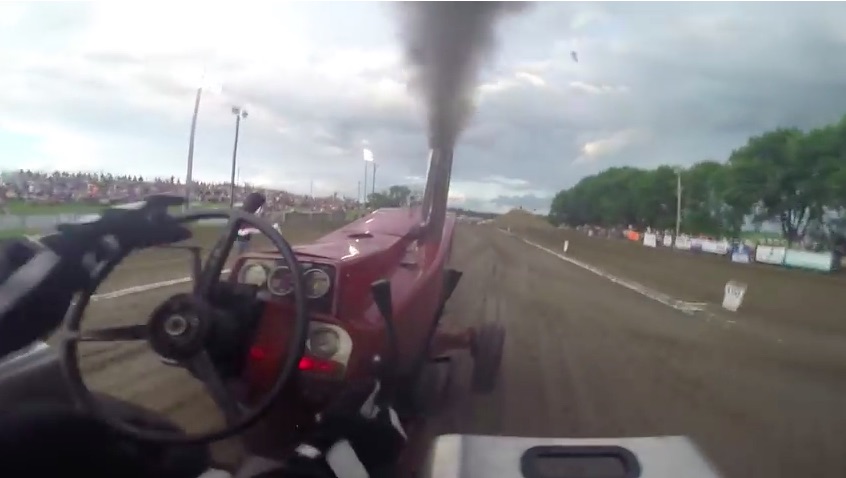 While I realize that for many people, tractor pulling stands as a kind of enigmatic activity. Something that seems so basic and straightforward that it couldn’t possibly be hard or require much skill. Those people are missing the whole point and beauty of one of motorsports most nuanced activities. The fury of the pull itself masks the prep and pre-work done with the tractor to make it work for the conditions, the sled, and all of the other stuff that’s going on when trying to get a massive load moving. Then there’s the driving element.

Much like people who think that professional or high level sportsman drag racing drivers have no sort of specialized skills, those who think that pullers don’t do anything but stand on the gas and pray are very wrong as well. In this video we ride with Britt Peiffer on an International 1066 Hot Farm class pulling tractor. These things are cool hot rods in the sense that they use modified factory engines that keep the factory head, block, and exhaust manifold but allow stuff like 3″ inlet turbos and internal modifications. Basically, these smokers are making a bunch of power! You’ll see a couple of the critical operations Britt performs when making a hook. The first is bringing the revs up to the proper level, the second is releasing the clutch in the right and measured way for the conditions, and the third is using that lever on the left of the wheel. What’s that thing? The Torque Amplifier and it’s pretty awesome.

The torque amplifier was an option on these tractors and basically it is an auxiliary two-speed transmission that can be shifted without using the clutch. What you are going to see Britt do is launch the tractor and when the revs climb, crank the torque multiplier into high, carry the front end for a long time and then when the tractor starts to bog and lose revs, Britt kicks the sucker back into low to keep the turbo lit and claw whatever distance was left out of the tractor.

You’ll see a couple of hooks from a couple of angles in this video and we think it is one of the more interesting pulling videos we have seen in some time!

Press play to ride along on a Hot Farm class pulling tractor as it hauls the sled!

Good Sounds: This Video Features The Best Sounding Straight Eight Engines In The World Wild Mechanical History Video: The Best Footage We Have Ever Seen Of The 1960s GE Walking Truck - Neat!