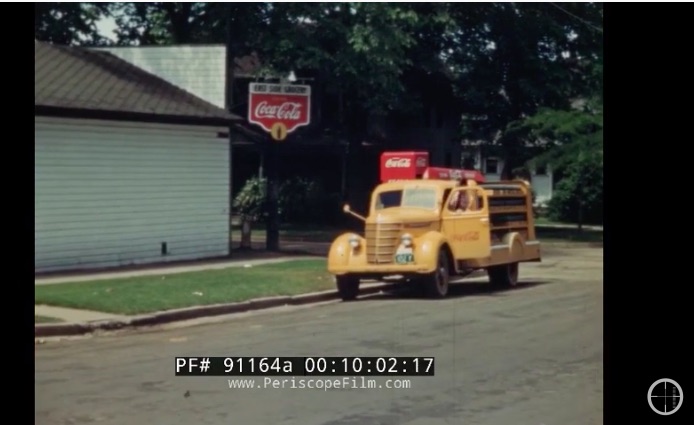 Want to talk about a window into a world that no longer exists?! This is some really spectacular footage that seems to have been made by a local Coca-Cola bottler/distributor a long, long time ago. Showing the delivery drivers at work in the Chippewa Falls, Wisconsin area during the WWII era, we not only see the guys and the trucks, we see the locations they were delivering to as well as the bottling plant where the good stuff was being made.

My first job out of college was working as a delivery driver for a beverage company. It was bottled water, not soft drinks but the reality is that the job was really similar to what these guys are doing and frankly anyone who has ever worked as a delivery guy of any type should watch this and smile. I remember making 70-80 stops a day and literally running my ass off to get done before the evening. The guys are definitely working and moving but they are also able to take time with their customers and they don’t seem to have the look of people who are constantly under the gun to keep the pace up.

It is cool seeing them sling the cases of glass bottles, right? Pretty interesting that you don’t see a dolly, a hand truck, or anything of the sort being used here. One hand and one case at the time they were restocking locations with. Totally great. The end of the film swaps to color which is a nice surprise.

I also love the locations that are being delivered to as well. Old school gas stations, stores, and restaurants. Note the abject lack of traffic as well! Today when you are hustling on the sidewalk like that you are trying to not get run over by people and cars. These dudes had a pretty wide berth to use and complete their rounds.

Frankly, given the chance, I’d love to spend a day in the shoes of one of the men in this video. It would be neat.