Can You Friction Weld With Your Home Drill Press? If The Answer Was Kind Of Would You Be Interested? 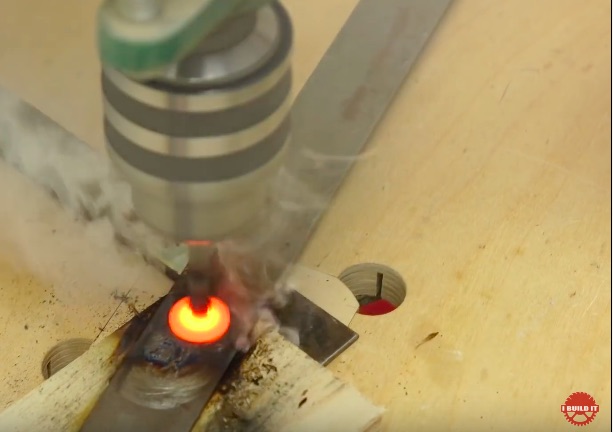 We love internet videos where people just film themselves trying stuff to see if it works. It is interesting to be a part of the discovery process, especially if it involves something that we’re not sure about ourselves. When we stumbled upon this video of a guy trying to friction weld stuff using his own home drill press we had to stop and watch because how could we not? In the best case it would be successful and in the worst case it would be some sort of a molten hot failure. It seems like there’s no losing here, right? As it turns out, it was better than either of those outcomes because while it was not a total success it was not a total failure either.

Friction welding has become a big part of the manufacturing process in cars and other equipment. We can’t speak to the physics and the hows/whys it may be a better form of fusing stuff together than human beings could be but we can speak of how awesome the process is. In many cases the friction welding is done using tiny vibrations at a very rapid frequency. That creates the head and the two parts being pressed together fuse…an onto the next one.

Being that this is a home shop drill press there are no vibrations, only a screw driver bit that is chucked into the press and the speed has been set for 3,000 RPM. Before you go off about the wood blocks, yeah we were thinking that it wasn’t the brightest idea either, especially when one of them starts on fire, but by the time we get to the last attempt the wood is gone and there is more temperature suitable material under the metal that is being welded.

Maybe we shouldn’t have been as impressed with this process as we were but for a first attempt just screwing around, it seems pretty neat. Refining it and using better matched materials would likely yield better results, yes? Yeah, we know that this is largely useless but we still think it is cool.

Do us a favor and please do not burn your place down trying this…k?

Video: Watch A 427ci Blown Ford SOHC Motor Make 880hp On The Dyno Ride Along In A Thundering Big Block (Real) Greenwood Corvette As It Laps Daytona At Night