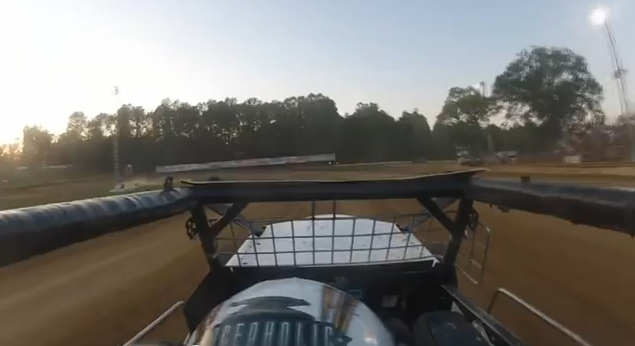 As the world has known for like 100 years, Sprint Cars are awesome. Case in point, this video which shows a wingless sprint car making laps on a dirt track and pulling the front end off the ground on the exit of virtually every corner. We’re not sure if this was a qualifying session or practice or something because there doesn’t appear to be other cars on the track, but it is a five minute demonstration on how gutsy these little short wheelbase monsters are. We don’t know squat about the chassis setup on these cars or whether the wheelies are an indication of a flaw in said set up or a sign that you’ve got the thing on kill as it is dead hooking on greased up dirt. We know guys with drag cars that can’t get this to happen on asphalt!

The throttle response and sounds that this car makes are wonderful. As soon as the driver breathes on the throttle, the motor is screaming away and the front end starts to climb. He appears to be taking it easy through the corners without much slip angle, so again, we’re not 100% sure if this was a race, an exhibition, or some sort of practice.

We’re itching to drive one of these things. We promise that we won’t crash it too hard. Anyone have a friend crazy enough to let us try?

Press play and watch a wheelie happy wingless sprint car scream, yell, and head for the sky off of every corner!

3 thoughts on “Awesome In-Car Video: Watch A Wingless Sprint Car Pull Huge Wheelies Off the Corners Of A Dirt Track!”