Let’s Build A Rotary! This Video Of A Mazda 13B Engine Being Assembled Is Really Cool 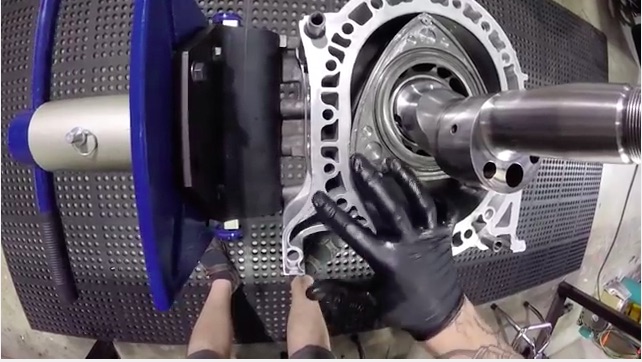 The Wankel Rotary engine has had an on-again/off-again affair with OEM production. Companies like NSU and Mazda were in on the rotary program hard and fast for years but time has not exactly been the design’s friend when it comes to production cars. Fuel consumption and emissions requirements have all but choked off the rotary engine from new car showrooms. They are not big torque producers either which can be hard in today’s world of blobby fatso cars that everyone seems to be making.

This being said the engines are still widely raced and are certainly a viable platform for making big, if not peaky power. The Mazda 13B is one of the great foundational engines in the rotary world. They were made for three decades and are in many ways the “small block Chevy” of rotaries in the sense that they have a simple design can be hot rodded lustily. The “13” in 13B is there to denote 1.3 liters of displacement. Rotary engines love the same stuff that piston engines do, so boost definitely wakes them up!

In this video we join Chips Motorsports and a head cam that follows the build of a 13B engine from the bare rotor case on the stand all the way to completion. The act of assembling one of these seems pretty zen-like. Most engine assembly stuff can be like that we guess.

Clearly the guy doing the assembling here has definitely stuck a few of these together. Like all engines, plenty of assembly lubrication through the entire build of this little screamer. We found this really fun to watch as it is not often you see one of these engines built from soup to nuts.

Video: Here's How A Morris Car Engine Was Built From Scratch In 1930s England! Watch a Honda CRV Wreck in Horrifying Fashion on the Nürburgring