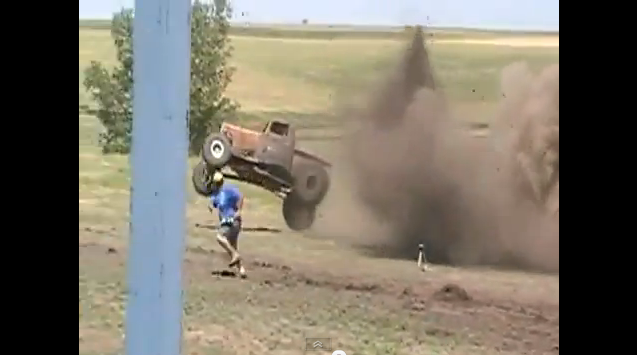 Jason Linden is the driver of an infamous mud bog and hill-‘n-hole truck named Nitroglycerin. He’s also a dude that is luck to be alive as you’ll see in this video. Linden suffered a horrifying high speed wreck at a hill-‘n-hole event at Bunker Hill, Kansas recently. If you are not familiar with what this hill-‘n-hole stuff is, think of a mud bog pit with big jumps in the middle of it. It requires a truck to have massive horsepower and hard core suspension to be competitive. These trucks accelerate like drag race cars and handle jumps like trophy trucks…usually.

When things go wrong in this type of competition, they go wrong in devastating fashion, usually leaving the driver as nothing more than a passenger. In the video, Linden is on what seems to be a bad ass run. The truck flies through the mud then literally takes flight over the jumps before landing awkwardly and launching into a series of incredible snap rolls that launch the wheels and tires off of the chassis like they’re made of plastic.

Linden got out of this thing with a concussion, bruised lung, and a destroyed truck. The fact that he lived says something about the strength of his roll cage and how tightly he was strapped into the vehicle. People can bag on mud bogging and hill-‘n-hole events all they want but this is proof that the vehicles and competition are as serious as a heart attack.

Press play and watch the most violent wreck you’ll see all week!

Check Out Our Gallery From The Famous Bob's Big Boy Cruise in SoCal! Question of the Day: What Has Been Your Scariest First Ride In A New Project Vehicle?