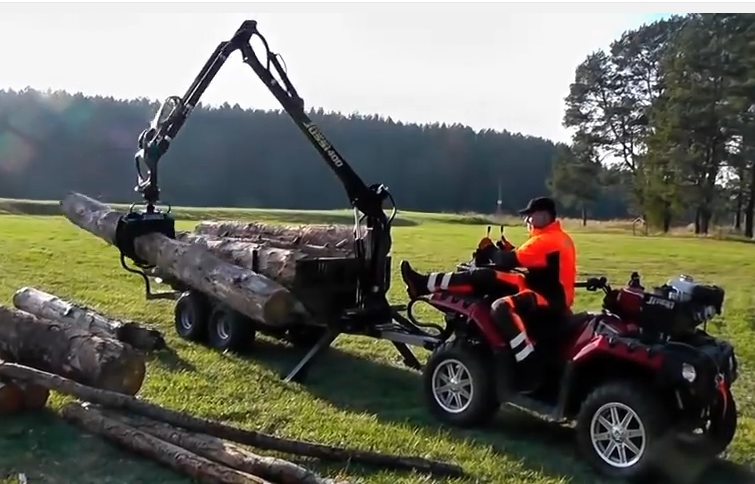 The math on gearhead maturity is pretty easy to comprehend. We may age  but the things we find fun and cool are largely the same as they were when we were six albeit larger. Case in point is this awesome little logging crane from a Swedish company called Kreisi Metall. Back in the day you probably had a logging truck as a toy. Maybe it had a grapple crane on it and you could put the logs on and off your truck in the living room or wherever you were playing with it. Now it would be completely ridiculous to buy a full sized logging truck these days just to mess around with it, but imagine if there was all the fun in a smaller package. Enter the Vhava Jussi 460! Designed to be towed around behind an ATV, this little rig is spectacular and sper capable. The grapple can lift nearly 1,200lbs and you’ll see it sling some big logs around in this video.

Just like the massive cranes found on full sized logging trucks this thing has a grapple end on it, the ability to rotate 360 degrees with a log, and in the hands of someone who knows what they are doing the material can be stacked or placed where it needs to be. In our hands it would largely be an unholy disaster but we’d have fun in the process. We never knew that something like this existed. If you owned a large piece of property or were in the business of clearing land it seems like this would be a handy unit, especially if you were interested in harvesting certain trees. With its compact size and ability to get in an out of places a truck could never dram of getting there are lots of potential uses. The one thing that did creep us out was looking at that little ATV with a trailer full of thousands of pounds of logs behind it. It isn’t like the guy was going to run down the highway, but it seems like any sudden movements could end badly.

The crane sounds like it is powered by its own gas engine that is spinning a hydraulic pump. The operator guy has great control of the unit and the crane swings around and moves quickly, it is no slouch! So Santa, if you are listening please send us this. We’ll let you spec out the ATV it is hooked to because we’re easy like that. Just leave it in the front yard next week. Your pal, Brian.